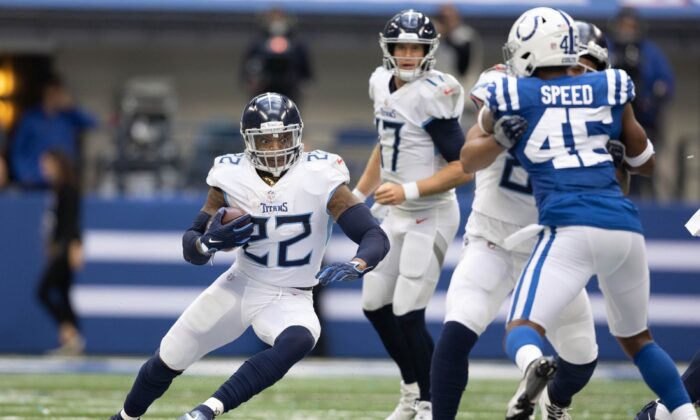 Tennessee Titans running back Derrick Henry (22) runs the ball in the second half against the Indianapolis Colts at Lucas Oil Stadium in Indianapolis, Ind., on Oct 31, 2021. (Trevor Ruszkowski-USA TODAY Sports via Field Level Media)
NFL

Young led the perennial power Crimson Tide to the No. 1 seed in the College Football Playoff with their win over Georgia in the SEC championship game Saturday. Young amassed 461 total yards in the game (421 passing) to set an SEC title game record.

Young ranks fourth in Division I in passing yards (4,322) and second in passing touchdowns (43) while throwing only four interceptions.

Stroud led the Buckeyes to a 10–2 record and a berth in the Rose Bowl. The redshirt freshman has totaled 3,862 passing yards, 38 touchdowns, and five interceptions in 12 games.

Pickett burst onto the national scene in his senior season, throwing multiple touchdown passes in every game and leading Pitt to its first ACC championship. He ranks fifth in the nation in passing yards (4,319) and third in passing touchdowns (42), nearly identical numbers to Young.

Hutchinson set a program record with 14 sacks and helped the Wolverines win their first Big Ten title since 2004, locking up their first CFP appearance as well. Hutchinson won the Big Ten Championship Game MVP award Saturday when he recorded four tackles, one sack and seven quarterback pressures in a 42–3 beatdown of Iowa.

Hutchinson will vie to become the second defensive player to win the Heisman, following in the path of another Michigan star, cornerback Charles Woodson, in 1997.

Missing from the list of finalists was Michigan State running back Kenneth Walker III, who was thought to be a Heisman front-runner earlier in the season when he helped the Spartans to an 8–0 start and scored five touchdowns in a win over Michigan. Walker ranks second in the nation with 1,636 rushing yards.