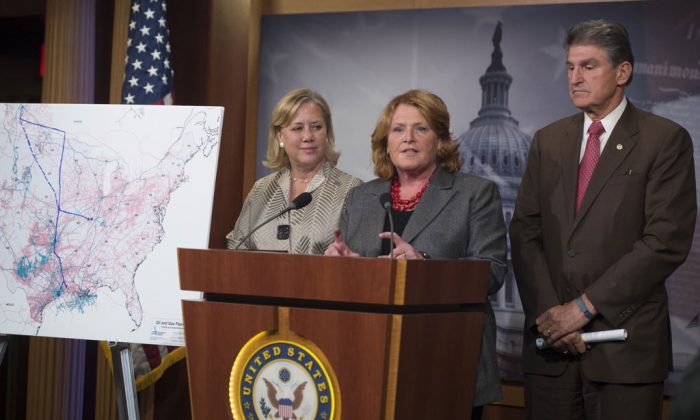 Sen. Heidi Heitkamp (D-N.D.) publicly identified women who have been sexually assaulted without their permission after apparently gleaning the names from Facebook and publishing them in an open letter that ran in several North Dakota newspapers on Oct. 14.

The open letter was purportedly signed by more than 125 people, but some of the women said they never signed the letter and were never asked by the campaign if they wanted to.

“I’m furious. I know I’m not the only woman hurt by this,” Lexi Zhorela, a 24-year-old hairdresser, told the Associated Press.

“I have only shared my story with a couple of people in confidence. I didn’t want it blasted for the world to see.”

She said she was planning on voting for Heitkamp but the situation has changed her mind.

Another woman, Eve Lancaster, said she was upset.

Multiple other women also posted pictures of the letter on Facebook showing their names on it but stating they hadn’t been contacted.

“A lot of these people listed, including me, did not give anyone permission for our names to be posted,” wrote Kady Miller. “I don’t even support Heidi Heitkamp and I am not a domestic abuse survivor. Should this even be legal?”

Several women who replied to Miller’s post said that they have been sexually assaulted and that they are upset they were included in the letter.

Heitkamp: "Anything you say that people are feeling right now is fair… I'm not going to diminish the anger, the hurt, the irresponsibility of this. There's no answer for this except to say that I am so incredibly sorry…"

"I know I'm not the only woman hurt by this." A North Dakota hairdresser says she never gave Sen. Heidi Heitkamp permission to use her name in a newspaper ad listing abuse victims. https://t.co/fPa6cJEY28

Heitkamp has not publicly issued a statement, according to a review of her social media accounts, but sent one to the Associated Press saying she apologized for the error.

“I deeply regret this mistake and we are in the process of issuing a retraction, personally apologizing to each of the people impacted by this and taking the necessary steps to ensure this never happens again,” the statement said.

Heitkamp, who is running for re-election, did not answer questions regarding how the error occurred or how many of the people listed in the advertisement were misidentified.

On Tuesday afternoon, more than 48 hours after the ad first ran, Heitkamp appeared on a radio show to apologize, according to American Commitment President Phil Kerpen.

“This is on me. This has got my name on it… The worse thing you can do is take away their privacy… And I did exactly that. And I need to personally apologize and say I was wrong… There’s no sugarcoating this… This was a colossal error,” she said.

Heitkamp said the women did not give their permission and said her campaign “worked through advocates and they provided the names.”