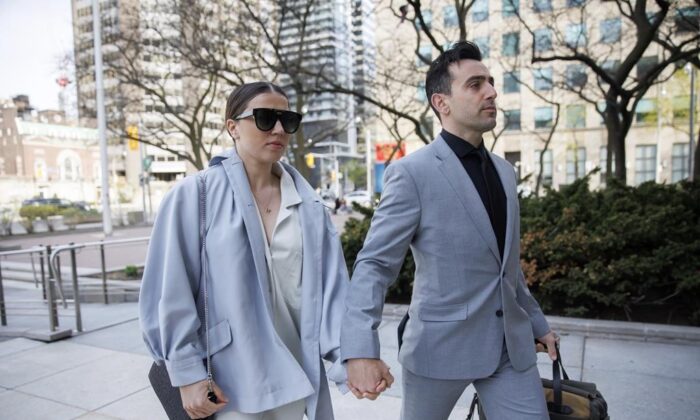 Canadian musician Jacob Hoggard arrives alongside his wife Rebekah Asselstine, for his sex assault trial at a court in Toronto on May 10, 2022. (The Canadian Press/Cole Burston)
Canada

TORONTO—Jacob Hoggard, the frontman for the Canadian band Hedley, has been found guilty of sexual assault causing bodily harm against an Ottawa woman but acquitted of the same charge against a teenage fan.

Hoggard, 37, has also been found not guilty of sexual interference, a charge that relates to the sexual touching of someone under 16, in an incident involving the same fan when she was 15.

The singer, who wore a dark suit, hugged his wife in the courtroom after the verdict was read. She wiped away tears after he returned to his seat.

A hearing on bail is scheduled for Monday morning, with a sentencing hearing expected this summer

The jury, which appeared to be composed of 10 men and two women, began deliberating last Tuesday and twice indicated it was deadlocked on “some” counts. Each time, jurors were asked to keep trying. They went on to replay the bulk of the testimony given by the two complainants and Hoggard, and asked several questions on legal issues, many related to consent.

Since Hoggard acknowledged having sex with both complainants, the case turned on the issue of consent, with jurors left to determine whether the encounters were violent rapes, as the complainants alleged, or consensual one−night stands, as the singer maintained.

The musician has recently been charged with sexual assault causing bodily harm against a third complainant in an incident alleged to have taken place in Kirkland Lake, Ont., on June 25, 2016. Hedley played the Kirkland Lake Homecoming festival on June 24 of that year.

The new charge could not be reported on until jurors in the Toronto trial began their deliberations to avoid the risk of tainting the jury.