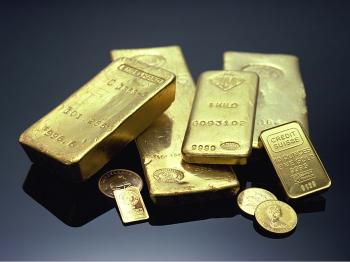 FISCAL SAFE-HAVEN: For centuries gold has served as a stable and reliable form of value. It can be a very good place to hedge your money in today's market volatility. (Photos.com)
Business

By Samuel Washington
Print
Hedging: No, it’s not what you think. It's a bit early in the year to be sharpening your pruning blades, plus the winter's cold temps have likely kept your plants and shrubs at minimal growth over the past couple of months.

The type of hedge I am referring to here is of the monetary kind. Generally speaking, hedging entails placing assets in a position that will likely prevent them from decreasing in value.

In today's economy, you are likely to hear the phrase "Cash is king," and many financial advisors and economic specialists are emphasizing the benefits of liquidity. That is, holding assets that are easily converted into cash will keep you in a position wherein you are more nimble to adapt to the frequent changes going on in the marketplace.

For example, hedging can apply to foreign currency exchanges (commonly referred to as Forex), stocks, bonds, as well as commodities. The idea is to place assets from one class into a position of more stability. Retrospectively speaking, it would have been a good idea for a holder of Bear Stearns stock, for example, to sell the stock, transferring those assets into cash prior to the news of bankruptcy reaching the public.

There are different types of hedges that can be applied, many of which include complex formulas for compounding interest and positive appreciation, but some of the most reliable hedges are very simple.

This writer is a fan of hedging cash into precious metals such as gold and silver. The cause is to take cash, which lately has been subjected to volatility due to stock market turmoil, legislative changes, as well as the behavior of other nations' currency, and transfer it into gold and silver metals.

Historically, gold and silver have always held some degree of value and have demonstrated differently during different economic conditions. But never in time has gold's value been determined as worthless, unlike various printed forms of currency. What's more is that gold is a universally accepted form of currency. That is, you could take 1 ounce of gold from the U.S. and bring it to just about any other developed nation and convert it into an equivalent (relatively speaking) amount of money or goods in that respective place.

Silver, like gold, is also very liquid and provides as a nice hedge for your dollars. Silver coins are less expensive and can be more readily converted. There are a plethora of mechanisms for buying and trading silver and gold. These range from electronic traded funds (ETFs), silver and gold bullion, as well as historically rare coins known as numismatics.

If the concept of hedging is new to you, gold and silver is a good place to start. They're pretty safe for the new investor and given the light of the current instability out there, they are a surefire way to protect some of your assets. Plus, like your pruning sheers, you can hold your gold and and silver in the palms of your hand, cutting and trimming any undesirable assets you may have in your portfolio, leaving you with an attractive hedge for years to come.