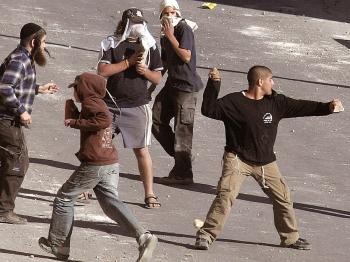 A masked Palestinian youth kicks a burning tire in the West Bank city of Hebron on December 3, 2008 during a protest against the occupation of a disputed house by Jewish settlers. (Hazem Bader/AFP/Getty Images)
Middle East

Aviva Grunpeter
View profile
Follow
biggersmaller
Print
JERUSALEM—Jewish settlers in the city of Hebron have been rioting for three days after the rumor spread that the army was planning to evacuate a house that the Jewish inhabitants claimed they bought from a Palestinian.

Thousands of young settlers and supporters came from other West Bank settlements, and from across Israel, crossed the Green Line, converging on the “House of Contention” which was supposedly to be evacuated. The rioters are fighting not only with the Palestinians but also with Israeli security forces. Palestiniana and Israeli security personnel have been injured in the violence.

Palestinians respond by throwing stones on settlers and on soldiers. The IDF (Israeli Defense Forces) and the police declared the area a closed military zone and blocked the way to the city of Hebron.

Few years ago some settlers inhabited a house near the Machpelah cave in the center of Hebron’s Arab quarter claiming they bought the house from a Palestinian. But the Palestinian pleads that he didn't sell the house, but that the settlers invaded it. After months of debate, the Israeli High Court of Justice recently ruled that the house must be evacuated.

The city of Hebron symbolizes more than any other Middle Eastern city in the similarities between Arabs and Jews. Abraham, the biblical patriarch of both peoples, is believed to be buried in the “Cave of Machpelah" along with the other patriarchs and matriarchs, all sacred to both religions.

Palestinian sources reported that four Jewish settlers stabbed a Palestinian in Jerusalem. The Palestinian was rushed to Hadassah hospital; medical source report that he was seriously wounded.

Settler leaders in Hebron feel they are losing control over the young, hardcore, right-wing extremists. Settlers claim that most of the rioters come from outside Hebron, and that Hebron resdients tried to get the newcomers to leave.

Defense Minister Ehud Barak has advocated a hard line against the rioters in Hebron, and security force officials refused to say when the operation of the evacuation would take place.