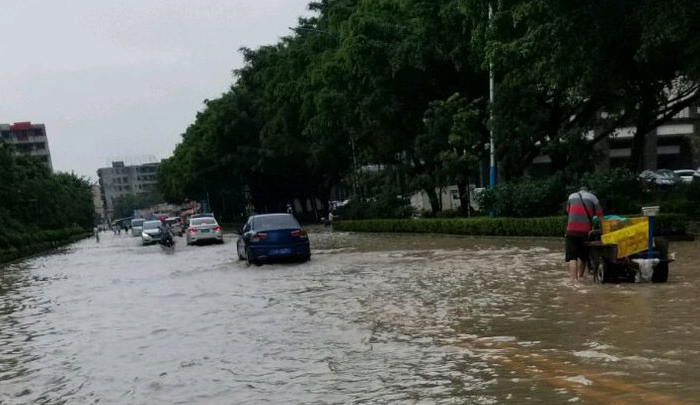 Heavy rain has battered southern China all week, with more downpours forecast for this weekend. The subsequent flooding has claimed at least four lives as a result of electrocution, according to official estimates, though locals have reported many more. Local residents are also calling out local authorities for failing to improve electrical infrastructure to prevent such electrocutions from happening.

The four deaths all took place on June 8. At noon, a man was found dead, lying motionless on a flooded street in Zhaoqing City in southern China’s Guangdong Province, reported Chinese news portal Sohu. He likely died due to electrical leakage from an unknown source.

Then at around 5 p.m., a 17-year-old student at a local transportation vocational school died of electrocution while walking in the rain at Baiyun District in Guangzhou, the capital of Guangdong Province, reported state-run media Xinhua. It was later determined that the electrical leakage was from a 220-voltage circuit board inside a traffic control box.

Later, at 7 p.m., a 30-year-old mother and her 10-year-old daughter were both electrocuted at Chancheng District in Foshan City located in Guangdong Province, reported Hong Kong news website Initium Media. The electricity came from an electrical switch box at a nearby bus stop. They lay motionless in the water for about 30 minutes before authorities arrived.

On the popular social media platform similar to Twitter, Sina Weibo, several netizens revealed several cases of pedestrians requiring medical attention after they got electrocuted by power leakage from street lamps in Guangzhou and Foshan, according to Taiwanese newspaper the Liberty Times on June 10.

One Weibo user posted information about a death in Zhongshan City in Guangdong Province. The accompanying photo showed a man who appears to have died from electrocution, with the body being pulled by a stick from the back of a car amid flood waters. It is not known when the man died.

The fear of getting electrocuted was pervasive throughout the region, according to a report by Radio Free Asia (RFA). On June 13, a picture circulated online of a local police officer standing on a police car trying to pull a dead body from flood waters with a stick to avoid electrocution from contact with the water.

Several others have also died from electrocution amid flooded streets in Huadu District in Guangzhou, according to Mr. Hsu, a local resident.

“I do worry. When it rains and I am out picking up my child, I always wear water boots,” said Mr. Hsu. He added that he has not seen local authorities take any measures to prevent high voltage devices and other power sources from leaking electricity.

Local authorities should be held responsible for these deaths, said Jia Pin, a rights activist from Guangdong Province, in an interview with RFA.

“Guangzhou, being a city in the Pearl River Delta region, is affected by many typhoons every year,” said Jia. “The local government should know about this by now and improve the water drainage system in the city, to prevent something like this [electrocution] from happening.”

The Chinese regime’s online censorship was in full force on Weibo, according to RFA. Videos showing people being electrocuted were deleted from the platform soon after posting.