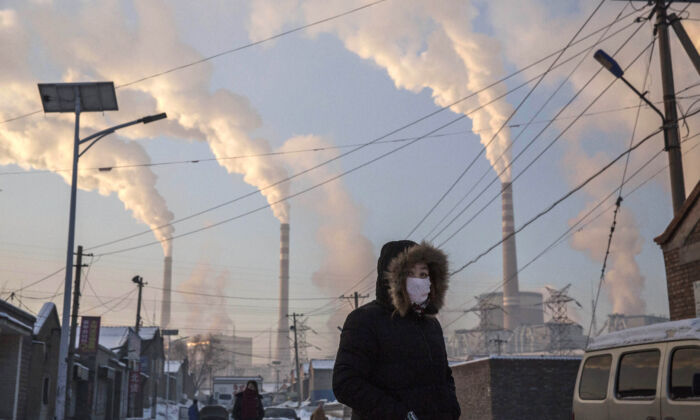 Smoke billows from stacks as a Chinese woman wears as mask while walking in a neighborhood next to a coal fired power plant in Shanxi, China, on November 26, 2015. (Kevin Frayer/Getty Images)
Social Issues

The downpower that struck 11 cities in northern China’s Shanxi Province has triggered flooding and landslides, destroying railway lines and bridges, and causing fatalities. The provincial weather agency said on Oct. 10 that showers will continue the next 10 days.

Heavy rain beginning on Oct. 2 has suspended 60 coal mines, 372 other mines, 14 hazardous-chemical enterprises, and over 1,000 constructing projects, the Shanxi government said in a notice on Oct. 8.

The halts lay additional stress as the country scrambles to produce more coal to stem a deepening power crisis.  Shanxi is the country’s top coal-producing province, with production accounting for more than a quarter of the national total in 2020. Around two-thirds of the country’s electricity comes from burning coal.

The crisis has led to power rationing in more than half of China’s provinces over the past few weeks. The electricity cuts have disrupted daily life for tens of millions of people, crippled industrial output, and wreaked havoc on global supply chains.

Days before the extreme weather, Shanxi signed contracts to commit coal supply for the winter time to 14 provinces across the country, including the northeastern Liaoning Province, state-run news agency Xinhua said on Sept. 29.

People living in Liaoning and two neighboring provinces, where the temperature drops to 51 degrees fahrenheit in October, have recently experienced unannounced electricity cuts in their homes. Residents also complained about traffic lights being turned off, weak network signals, and a lack of heating.

Shanxi has instructed its 98 coal mines to expand annual output capacity by 55.3 million tonnes over the remainder of the year, an official from the provincial government confirmed on Oct. 8 in a document reviewed by Reuters.

Provincial authorities will also allow some 51 coal mines that had hit their maximum annual production levels to keep producing in the fourth quarter and to raise capacity by 8 million tonnes, which is expected to add 20.65 million tonnes of extra supply.

However, the heavy rains have cast doubt on whether officials can meet this target, as key coal-producing cities, including Linfen, Xiaoyi, Jiexiu, and Yangquan, are among the affected areas.

Analysts suggest the reasons for the power crisis can be traced back to a string of policy missteps, including the shutdown of coal plants, and an import ban on Australian coal.

One cause was Beijing’s 2016 decision to close more than 1,000 coal mines in a bid, at the time, to address a supply glut, Chinese commentator Wang Xiaogang told The Epoch Times.

After the Australian Prime Minister called from an independent investigation into the origins of the pandemic last April, the Chinese regime has leveled a spate of trade tariffs and restrictions on the country, including an import ban on coal in December. Western officials have described Beijing’s actions as “economic coercion” designed to intimidate Canberra into softening its stance towards the Chinese regime.

Recently, China reportedly unloaded one million tonnes of Australian coal which had been stored in warehouses along China’s coast for months in an effort to ease the energy crisis.