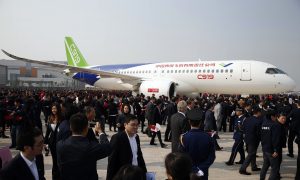 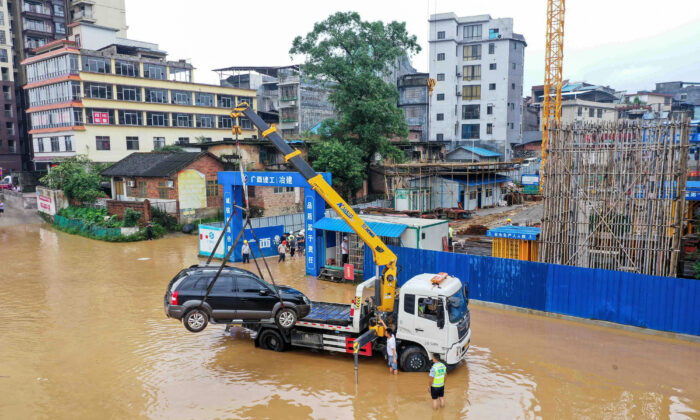 Heavy rain swept northern and central Guangxi from June 27 to July 2, causing damage to a population of a million people in 46 counties, according to China’s outlets. The level of emergency response was upgraded from four to three. So far, 91,500 residents have been displaced, 16 killed, and 10 are missing, while direct financial losses reached 2.9 billion yuan (about $453 million).

However, a July 3 report by state broadcaster China Central Television (CCTV) made no mention of casualties or financial damages incurred by the extreme weather. Instead, it turned to focus on a local waterfall at Detian village in Daxin county, Guangxi, describing how spectacular it looked and how a “golden waterfall” had formed. The story carried a promotional title that translates as “Rare Sight! ‘Golden Waterfall’ Appears in Guangxi” along with a nine-second video. It explained that the color was created with the help of shining sunlight and rapids due to the sudden rise in water level in the upper reaches of the Guichun River.

However, a host of online posts questioned CCTV’s claims.

Another netizen with the username Cowboy in the Kunlun Mountain said, “The outlet has serious problems in its journalistic orientation because it lauds severe land degradation as golden water.”

Someone called Huang Guixiong expressed that the video is apparently attractive, which comes from filter processing if compared with the color of the surrounding shrubbery.

In the past, one CCP tactic has been to attempt to make a positive story out of a tragedy in order to obfuscate the full truth from Chinese people.

On May 6, 2018, authorities in Wenchuan county, Sichuan Province planned to designate May 12, the date of a local earthquake, to be a “thanksgiving day” to show their gratitude for the support they had been given, according to Xinhua News Agency.

However, the move was criticized as pointless and shameless.

By an official account, the earthquake led to 68,712 deaths and 17,921 missing, among whom 5,335 were elementary and middle school students, due to classrooms that had collapsed.

Based on their findings, parents suspected that the fallen buildings had been badly constructed, using substandard cement and rebar during construction.