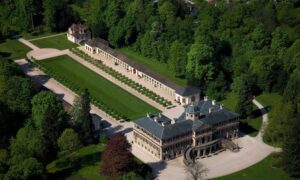 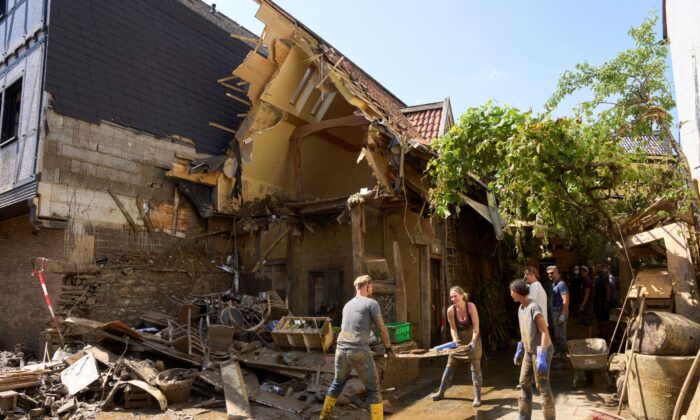 Helpers work in the streets of Dernau, in Rhineland-Palatinate, Germany, on July 21, 2021. (Thomas Frey/dpa via AP)
Europe

The DWD weather service said localized storms were likely from midday Saturday, expanding to large parts of Rhineland-Palatinate state later in the day.

Officials said Thursday that the death toll from last week’s floods in the western state had risen to 128. Across Germany, 177 people have been confirmed dead, and 31 deaths were reported from neighboring Belgium, taking the total flood deaths to 208.

Authorities have built a huge camp for rescue workers at the Nürburgring race track. More than 4,500 civil defense workers, firefighters, and soldiers have been deployed to help with cleanup efforts in the badly affected Ahr valley region of Rhineland-Palatinate.

On Wednesday, Germany’s Cabinet approved a roughly 400-million-euro ($472 million) package of immediate aid for flood victims. It promised to get moving quickly on funding plans to rebuild devastated areas, which is expected to cost billions.

The extent of the damage has yet to be determined “but it is immense,” Chancellor Angela Merkel said at a news conference in Berlin on Thursday. She noted that Germany’s railway operator, Deutsche Bahn, has said 600 kilometers (373 miles) of track were affected.

“We will need a long time to repair all this damage,” she said.