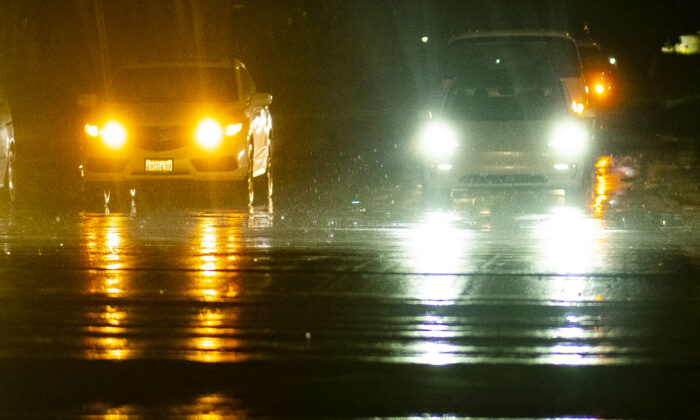 LOS ANGELES—After several days of above-normal temperatures last week, the Southland will get a dose of badly needed rain on March 28, with a storm possibly arriving late the prior evening.

A Pacific storm system will move closer to the region Sunday night with widespread rain, high elevation snow and gusty winds through Tuesday morning, according to the National Weather Service. Monday will see a chance of thunderstorms that could bring heavy downpours and small hail in the afternoon and evening before drier conditions prevail late Tuesday through Friday, the NWS said.

“The soaking rain, falling heavy at times, is likely to create extra slowdowns and delays for the Monday morning commute—it could be a very challenging commute. Motorists are reminded that especially just as rain starts after being dry for an extended period of time, oil and other materials on the road surface can produce extremely slippery road conditions when they mix with falling rain,” said Jonathan Porter, chief meteorologist for AccuWeather.

The rain is not expected to start falling until Sunday night—likely meaning red-carpet arrivals for the Oscars should be spared, although the arrivals line is covered just in case. But it was noticeably cooler, with temperatures dropping around 10 degrees Sunday.

Moderate rates of rain are anticipated Monday morning, with steadier showers anticipated by Monday afternoon. Forecasters said between a half-inch and 1.5 inches of rain are possible on the coast and in the valleys, with one to three inches possible in foothills and mountains.

A winter storm watch will be in effect from 10 p.m. Sunday through late Monday night in the Los Angeles County mountains—excluding the Santa Monica range—were heavy snow was possible, with accumulations of 8 to 12 inches above 6,000 feet and wind gusts as high as 60 mph.

Monday’s high temperature was expected to be around 61 degrees in downtown Los Angeles.

Stormy conditions are expected to clear out by late Tuesday, with temperatures again climbing by 5 to 10 degrees, according to the NWS.

Forecasters did say there was a slight chance of rain across the Southland late Thursday through Friday.