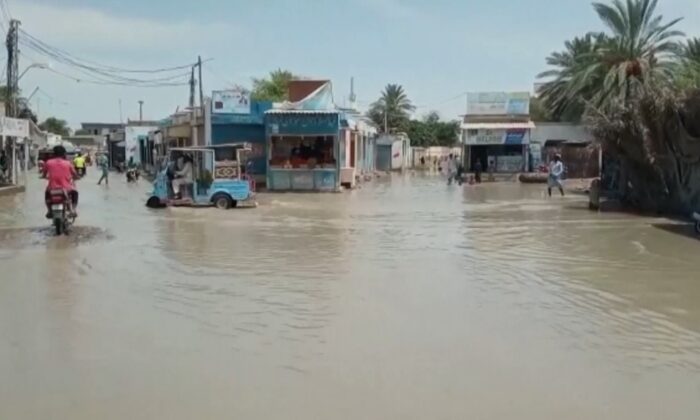 A flooded area in Quetta, Pakistan, on July 6, 2022, in a still from video. (AP/Screenshot via The Epoch Times)
Asia & Pacific

QUETTA, Pakistan—At least 77 people, including women and children, have died in rain-related incidents across Pakistan during the past three weeks, the country’s minister for climate change said Wednesday.

The monsoon rains also damaged homes, roads, bridges, and power stations across the country since June 14, Sherry Rehman told a news conference in the capital, Islamabad, as storms continued lashing the country.

Rehman said 39 of the 77 people died in rain-related incidents just in Baluchistan since last month.

“This is a national disaster,” Rehman said about the rain-related casualties.

TV footage showed some vehicles being swept away by the deluges of floods in Baluchistan.

In a statement, Pakistan’s President Arif Alvi expressed his grief and sorrow over the loss of life in Baluchistan and elsewhere in the country.

Streets and homes were flooded in Quetta, the capital of Baluchistan province, the provincial disaster management agency said.

Naseer Nasar, a spokesman at the Baluchistan disaster management agency, told The Associated Press that at least 50 people were injured in rain-related incidents in the province since June. He said rescuers were transporting people to safer places away from floods and rain-hit areas in Baluchistan.

Every year, many cities in Pakistan struggle with the annual monsoon deluge, drawing criticism about poor government planning. The season runs from July through September and experts say rains are essential for irrigating crops and replenishing dams and other water reservoirs in Pakistan.

Some of the areas in southern Pakistan have faced drought since earlier this year.