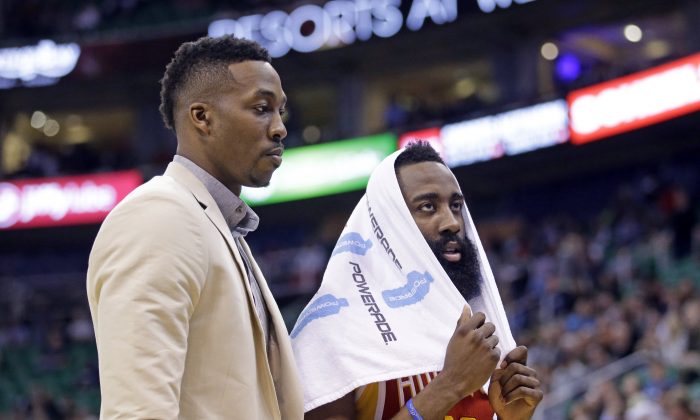 Houston Rockets' James Harden, right, and Dwight Howard walk back to the bench late the fourth quarter of an NBA basketball game against the Utah Jazz on Thursday, March 12, 2015, in Salt Lake City. The Jazz won 109-91. (AP Photo/Rick Bowmer)
NBA

James Harden has shouldered a heavy load without Dwight Howard most of the season, boosting his play to help the Rockets stay in the top four in the tough Western Conference while staying in the top five in points per game.

John Wall has avoided missing a game, saying he missed too many in previous seasons. His decision was influenced by multiple injuries to backcourt mate Bradley Beal, and the fact that Wall is easily the best player on the team.

Chris Paul has played heavy minutes in almost every game this season, with no chance to rest with injuries to teammates like Blake Griffin.

These three stars, and a slew of others, have piled up minutes as the regular season comes to a close. Harden, Wall, and Paul haven’t suffered a major injury this season. Others playing heavy minutes, like Jimmy Butler and Anthony Davis, haven’t been so fortunate.

The wear-and-tear on some of the league’s superstars will undoubtedly have an impact on the upcoming playoffs, with some players able to push through the accumulated aches and pains and others succumbing in some way, even if their on-court performance slows just a little.

That’s what seemed to happen last season, when Wall had several uncharacteristically bad performances against the Pacers, in a series the Wizards eventually lost. Paul’s lapses played a large part in the Clippers’ loss to the Thunder. The worn-down Heat lost badly to the still-energetic Spurs. San Antonio’s strategy of players playing fewer minutes, and even taking some off throughout the season, has been spreading throughout the league.

Signs of decline are already cropping up around the league. A series of major injuries has hit teams that feature players playing heavy minutes, most notably the Bulls but also the Trail Blazers, Clippers, and Pelicans. And several top stars are struggling this month, noticeably lagging. Several others, such as Kevin Love, have taken a game or two off for rest.

Most players say that the heavy minutes aren’t playing a big role or perhaps none at all. Harden told reporters recently that he feels good, and insisted his back-to-back poor performances in losses was not due to heavy minutes. “I have a feeling how to handle the long season and how to prepare my body and how to manage my body,” he said, though most Houston fans say he needs more rest. Damian Lillard told reporters that he doesn’t want to blame anything on “‘I’m tired’ or this is hurting or that’s hurting.'” Coaches often talk little about doling out heavy minutes, or like the Bulls Tom Thibodeau refuse any link between those minutes and injuries or players otherwise wearing down.

Playing heavy minutes in recent seasons and/or throughout a player’s career can also contribute to a gradual breakdown. Durant, Carmelo Anthony, and Butler, who all played heavy minutes last season–Durant led the league with 3,122 total minutes–have suffered big injuries this season.

The last several seasons have seen few such players–Damian Lillard, Durant, Monta Ellis, Kobe Bryant, and DeMar DeRozan in 2012-13. Durant, Ellis, and DeRozan last season. Perhaps none this season (A number of players are close–led by Harden, Wall, and Lillard–but none are on track to reach or surpass the mark.

That’s probably good news for title contenders–title winners over the past two decades or so have featured stars averaging only 33 minutes or so a game.

Player trainer David Thorpe told ESPN that the rule changes in the NBA, such as the handcheck rules, have made basically every minute played more intense, which would mean fewer minutes doesn’t necessarily equal a lighter workload.

“Being an NBA player is far more work now. Tom Thibodeau is the guy who figured out how to take advantage of the new rules. And watch his teams. The minutes now are so much more intense. There is movement all the time, unless you’re guarding isolation, which is rare. And it’s movement towards action. There’s more contact. There’s more mental fatigue. There’s more to do,” Thorpe said.

“Ask coaches who were in the league before and after, like Rick Adelman or Pat Riley. They’ll tell you. There’s just so much more to defense these days.”