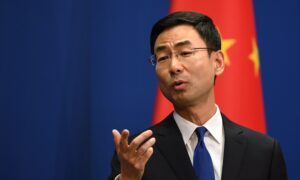 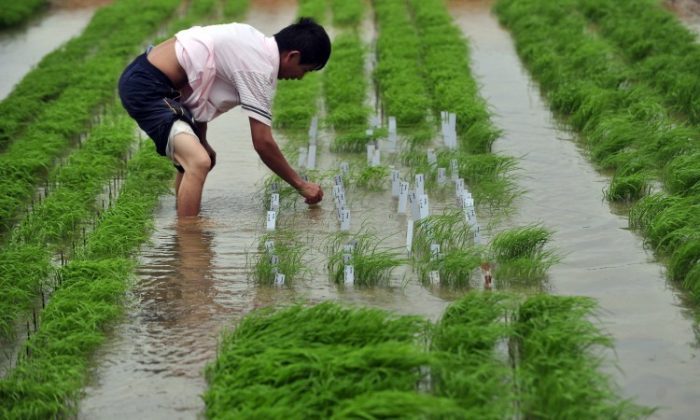 A Chinese researcher checks on the rice at a farm in Wuhan, central China, on June 11, 2011. (STR/AFP/Getty Images)
China

Escalating contamination of China’s farmlands has severely decreased rice sales in Hunan, China’s top rice-growing province. And rice elsewhere has been found to be contaminated with lead and cadmium due to irrigation with industrial wastewater, according to recent reports.

Lanxi’s rice market is nationally renowned as the largest in Hunan Province, with more than 200 mills producing about 2 million tons of rice per year. Nearly 80 percent of the rice was being sold to the provinces of Guangdong and Fujian, but the poisonous rice scandal has led to the closure of many mills.

The scandal was exposed in a report by Southern Daily on Feb. 27. In 2009, Shenzhen Food Group purchased over 10,000 tons rice from Hunan, but discovered it contained excessive cadmium. However, the report said only 100 tons were returned, and the rest was sold to markets in Guangdong Province at a lower price.

Since the media exposure, Hunan’s reputation has suffered, and rice producers can no longer sell their product.

Ma Wenfeng, an analyst at Dongfang Aige Agriculture Consulting firm, told Chinese media that Hunan is China’s No. 1 province for rice production, with an annual harvest exceeding 26 million tons, that accounts for 13 percent of the nation’s rice production. Ma said the farmers will be hit hard if nobody buys rice from Hunan. “If the farmland is polluted with heavy metals, will farmers still plant rice?”

Economic Information, a subsidiary of the Communist Party’s mouthpiece Xinhua, reported that Hunan’s rice sales have dropped by 60 percent, and the food logistics industry has also been affected. Zhang Wenchang, head of Hanshou County Food Association, said in the report, “If this continues for another 18 months, 70 percent of the logistics industry will stop operating, and unemployment will be a big problem.”

Mr. Peng, owner of San Lian Rice Industry, told The Epoch Times that the rice they process at Lanxi comes from all over Hunan, and a few other provinces. “Our market has a big impact on the price of rice in the whole province, and even the entire country,” he explained. “The poisonous rice scandal severely affected the sales of rice produced in Hunan and the rice processing companies; 90 percent of the plants have stopped production.”

Peng’s plant used to sell more than 1,000 tons of rice to Guangdong and Fujian every month, but has been shut down for a month, now that Hunan rice is being boycotted. He said peasant workers, not just the farmers, are being seriously affected. “The closure of rice processing companies will also cause a series of problems, including job losses in all the related industries.”

Peng added that heavy metal inspection standards are “too strict,” and should be relaxed, as the rice passed all local inspections.

Ms. Huang, manager of Jinsui Food Processing Plant in Yiyang City, told The Epoch Times that the rice she sent for local inspection had all passed, and the scandal has seriously impacted rice sales in Hunan.

People in Guangdong are the largest consumers of Hunan’s rice, and are extremely concerned about the safety of their food. “It’s one thing when you don’t know about it, but it’s another when you know that your rice contains heavy metals,” a local, Shi Wei, told The Epoch Times. “They affect children’s brain development, and adults can end up with Alzheimer’s disease. Isn’t this killing us in Guangdong?”

Shi said he is sympathetic toward the people in Hunan, even though the people of Guangdong are boycotting their rice. “The farmers in Hunan are not to blame; they work hard to produce their rice, and they don’t want it to have a high heavy metal content,” he said. “But under the Chinese Communist Party’s rule, the environment has been heavily polluted, making our rice poisonous. It is the Party’s fault. It does not protect the ecosystems, it allows industrial waste to be released onto farmland, and it is poisoning the people.”

Hunan’s heavy metal contamination problems have become serious in recent years. During last year’s meeting about soil quality, Hunan’s Ministry of Agriculture revealed that heavy metal pollution had spread from light to heavy, from isolated to regional, and from suburbia to farming areas. The entire province is polluted with cadmium, arsenic, zinc, copper, and lead, which have a direct impact on all agricultural produce.

A leaked ministerial document revealed that 89,000 acres of farmland in China are contaminated with excessive levels of heavy metals, affecting 12 million tons of crops annually, which translates to $3.2 billion (20 billion yuan) of economic losses every year, according to a Feb. 7 Times Weekly report.

Translation by Frank Fang and Sophia Fang. Research by Ariel Tian and Olivia Li. Written in English by Cassie Ryan.