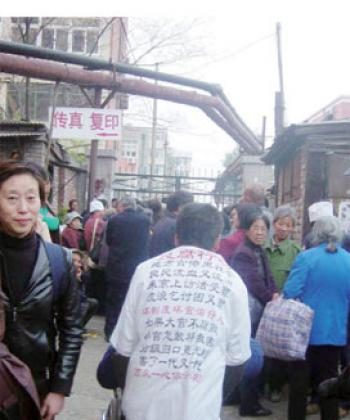 ‘Fury of the Heavens’ Incurred by Games Preparations?

Zang Shan
biggersmaller
Print
After failing to deal with a severe green algae bloom at the Qingdao Olympic sailing venue, event organizers were forced to close off the location less than 20 days before the event was to take place.

Several Chinese scientists have explained that these green algae blooms are the result of a combination of oxygen-rich water and hot weather. While some might say that the fact these algae blooms appeared before the Games commenced was surely a coincidence, in the eyes of someone like me, the proliferation of this green algae is surely the voice of Heaven.

When looking at the crimes the Chinese Communist Party (CCP) has committed in the name of the Olympic Games such as arresting and beating dissidents and petitioners under the guise of so-called “Olympic safety,” Heaven might chose to manifest as a “dissident” itself and use the Games to express its opinions.

In traditional Chinese culture, Heaven equates to God. However, after the CCP established its control over China, God’s revered status in the hearts of the people waned tragically. Mao Zedong once said, “No law and no God,” and “fight against Heaven and Earth.” Because of this, in the minds of today’s Chinese people, God has fallen to the level of an ordinary person and is seen as something to fight and struggle against.

Personally, I imagine that Heaven may become infuriated upon seeing the CCP’s actions. In fact, the CCP has invoked the fury of the Heavens several times recently.

The CCP put on airs to host the 2008 Summer Olympics under the pretense of “raising national strength and prestige.” On the contrary, the common Chinese citizen has suffered through a lot of harassment because of the Games. For example, several Beijing residents have been arrested and millions of migrant workers were expelled from the city. Petitioners have been treated as “hostile forces” and the CCP has attacked them viciously.

According to clearwisdom.net, thousands of Falun Gong practitioners have also been arrested during the 6-month lead up to the Games. One Beijing resident told me that officials actually built a large wall to hide small, shabby houses in an attempt to fabricate an atmosphere of prosperity without considering the inconvenience it causes local residents in the least.

During the last two weeks, CCP authorities have exerted oppressive control. Large numbers of so-called “idlers” were forced to leave the city and people entering Beijing were forced to provide identification.

Furthermore, the Beijing authorities mobilized as many as three to four million people to form a giant so-called “security force.” The number of mobilized people is so large that it rivals the number of audience members on nearly a 1:1 ratio, forming a kind of irrational “man-to-man” defence.

One Beijing resident summed the situation up quite well, “The Olympic Games are a symbol of peace and friendship. But here, we see no peace and no friendship. With police carrying machine guns everywhere and missiles pointed at the downtown core, it’s like they’re not holding the Olympic Games, they’re preparing for a war.”

I’d imagine Heaven has probably seen the events which have transpired and thus has expressed its views through various channels frequently. These expressions have essentially lead Heaven to manifest as a “Chinese dissident.” In my opinion, Heaven will continue to importune the CCP in response to its outrages.