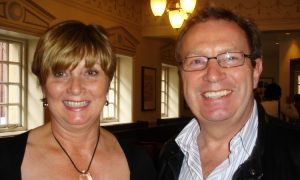 ‘Heaven Bless China, We Are Ready to Face the Storm’

Editor's note: The Epoch Times here publishes direct translations of statements made by Chinese people in ‘renouncing’ the Chinese Communist Party (CCP) and its subordinate organizations. Statements such as these are submitted to a website affiliate of the Chinese version of The Epoch Times, Dajiyuan. The movement to renounce, withdraw from, or quit the CCP, called ‘tuidang’ in Chinese, began in late 2004, soon after The Epoch Times published the Nine Commentaries on the Communist Party, an editorial series that explores the nature and history of the CCP. The statements offer a rare and candid glimpse of history in the making: the Chinese people turning their backs on the Communist Party, choosing conscience over pragmatism, and peacefully ushering in a future China free of Party rule.

Quit the CCP and Its Affiliated Organizations

I used to be bewitched and brainwashed by the Chinese Communist Party (CCP). But gradually I realized that the CCP is a dictatorial, suppressive, and violent political party. Within the organization, there is collusion among corrupt officials, starting from grassroots village leaders and party secretaries to even the highest level officials, permeating into every town, county, and city. The hidden interior of the organization is completely rotten. In our country, there is neither democratic attitude nor any justice at all under the CCP’s rule. The CCP uses all means to hide the truth forever from the people to protect its own interests.

People living in this country are helpless. But many are slowly discovering, awakening, enlightening and protesting, just as I am. I renounce the Communist Party and all its affiliated organizations! Heaven bless China, we are ready to face the storm!

I am a primary school teacher. I am a Buddhist. I know virtue has its reward and evil has retribution. There are people near my family (A Cheng in Heilongjiang Province) who did not get reasonable compensation for demolition and relocation of their houses. They had no way to get justice. When they went to appeal, they were traced back and detained for fifteen days.

Years ago one of my relatives was hospitalized in Harbin [capital city of Heilongjiang Province] for a minor operation. After the treatment, she left the hospital. After a few years, she fell ill. A medical check-up revealed that a kidney was missing! But she never had any other hospital treatment in her life apart from that single minor operation. There must be a racket on a large scale going on for this to happen in such a big hospital, where an individual doctor will not dare to do such a thing on his own. China's hospitals have turned into slaughterhouses. Doctors who should be curing people with kindness have turned into devils.

I was told today by a Falun Gong practitioner that hospitals collude with CCP military and prisons to harvest Falun Gong practitioners’ organs and cremate their bodies to cover up the evidence. I was very shocked, but at the same time I fully believe it. CCP is indeed evil and its hypocrisy is beyond imagination. It makes me feel sick.

I declare that I quit the CCP Youth League and the Young Pioneer’s Team.

The CCP carried out “land reform” at the beginning of its regime, which wiped out all elite of China's rural society! Its political campaigns in the early and mid-fifties wiped out all elite of urban industrial society! The Anti-Rightists movement in 1958 eliminated all elite intellectuals! Today, only “invertebrate animals” can survive in China. The Cultural Revolution and “economic reform” have completely damaged the cultural traditions and ethics of thousands of years. The CCP indiscriminately robs people of their labor, money, shelter and land, and has killed the hope of the Chinese nation. China will not have peace with the CCP! China will perish if the CCP continues to exist. We, Shanggen Shuiyue, Xin Zhiren are determined to quit the CCP! We do not hesitate to dedicate our lives to eradicate the CCP, and to restore China for future generations!