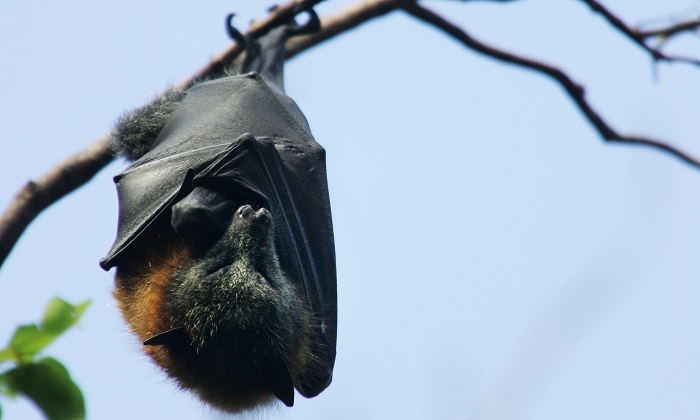 A file image of a flying fox – commonly known as a giant fruit bat – as it hangs from its roost in Sydney, Australia. (Ian Waldie/Getty Images)
Australia

Volunteers have rushed to help thousands of bats affected by a heatwave in parts of the Australian city of Sydney.

Large fruit bats – known as flying foxes – were falling from trees in two parts of city’s west as temperatures reached up to 47.3 degrees Celsius (117 degrees Fahrenheit) on Sunday.

Most of the distressed animals were baby bats.

Animal welfare volunteers in the suburb of Campbelltown did their best to hydrate flying foxes suffering heat stress while not disturbing the colonies.

A Facebook post by the charity Help Save the Wildlife and Bushlands in Campbelltown described how the heatwave affected a flying fox colony, killing hundreds who were either found dead on the ground or still hanging in trees.

“So many little lives lost due to the extreme heat and not enough canopy cover to shade them or keep them cool,” said the post.

“Adults sought out shade and more shelter further up the creek resulting in many babies being left behind to deal with the heat. Many pups were on their last lot of breaths before getting much needed help by the WIRES members,” the Facebook post said.

“As the dead bodies were recovered and placed in a pile for a head count the numbers had reached 200 not including the many hundreds that were still left in trees being unreachable, sadly a few adults were also included in the body count. It was a long and heartbreaking afternoon,” the post continued.

A flying fox colony in the suburb of Parramatta was also impacted by the heatwave, said animal-welfare group WIRES who praised “the heroic” work done by their volunteers helping the animals in what was a “very tough and very sad day.”

“The efforts of our volunteers yesterday was both heroic and heartbreaking. In extremely trying conditions they worked tirelessly to provide sub-cutaneous fluids to the pups that could be reached and many lives were saved but sadly many were lost too,” said WIRES.

“Hundreds of mainly young flying-foxes were lost to the heat yesterday and the final count could run to thousands.”

WIRES advised people to get in contact with them if they came across a heat distressed flying fox and gave tips on how to assist the animal. But the animal welfare organization also warned people not to touch flying foxes.

“It is important never to touch or handle a flying fox under any circumstance as a very small number may present a risk of contracting Australian Bat Lyssavirus, a disease transmitted through bites and scratches,” said part of an alert put out WIRES.

WIRES volunteer workers who triage stressed bats are vaccinated against the disease.

Other animals were also affected by the heatwave – some lucky ones had neighbours who could help them out.

“Too drunk” driver calls 911 on himself