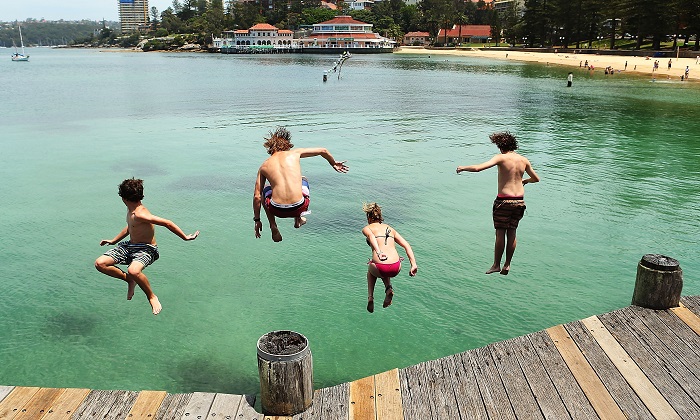 A file image of young people jumping off Manly Wharf in Sydney during an Aussie summer. (Brendon Thorne/Getty Images)
Australia

Reports of a section of melted highway is symptomatic of the intensity of the heatwave that has hit parts of Australia’s south east.

A ten kilometer stretch of the Hume Highway in central Victoria became a sticky goo on Friday, forcing drivers to slow down.

A spokeswoman for VicRoads told the ABC that hot weather could result in “bleeding of the road surface, which occurs when the bitumen becomes reactivated by warm temperatures and becomes soft and sticky.”

“This, combined with higher than usual traffic volumes, has affected the pavement on the southbound carriageway of the Hume Freeway between Tallarook and Broadford,” VicRoads said.

Traffic is crawling on the Hume Freeway near Broadford because it is MELTING!? pic.twitter.com/vBrFXcRDEX

For the following day, elderly and very young Victorians were advised to stay indoors. One popular hardware retailer even called off his regular BBQ sausage sizzle while an animal sanctuary closed its doors to the public.

There were also reports of some 3000 homes losing power in the state and total fire bans have been put in place in Victoria, Tasmanian and South Australia where many areas have been hit with strong winds.

“Any fires that start will be extremely difficult to suppress,” James Taylor, acting manager of the Bureau of Meteorology’s extreme weather desk, told news.com.au, citing the hot and gusty conditions.

Parts of South Australia reached 46 degrees Celsius and many parts of Victoria hit over 40 on Saturday, including Melbourne. It will get close to that high in Sydney and much of New South Wales (NSW) on Sunday.

NSW Police Deputy Commissioner Catherine Burn said: “The real issue is that we’re not going to see a relief in NSW until early next week, so we’re going to see sustained heat over the days and the nights.”

Burn urged motorists not to leave children or pets unattended in their cars.

“Cars become a furnace in this heat,” she said, reported The Sydney Morning Herald. “Anybody who is leaving a child in a car is just totally irresponsible and it can be deadly. Just don’t do it under any circumstances, particularly in the heat.

And the hot weather is here! Stay stafe as the west climbs to 40+ degrees, cameraman Nick and I are lapping it up, more 6pm @7NewsSydney pic.twitter.com/NcawgCTV1u

Victorians will face a rapid drop in temperatures later on Saturday with a gusty southerly change.

“It’ll be quite a marked drop,” the weather bureau’s Michael Logan told the ABC.

The #coolchange is now in range of #MelbWeather radar approaching #Geelong. You can track it for yourself over the next few hours at https://t.co/3qx5HN0cdq or on doppler if you know what you're looking at here https://t.co/yKyqhSZcAg pic.twitter.com/OamI03tRjA

Meanwhile, in the northern hemisphere: