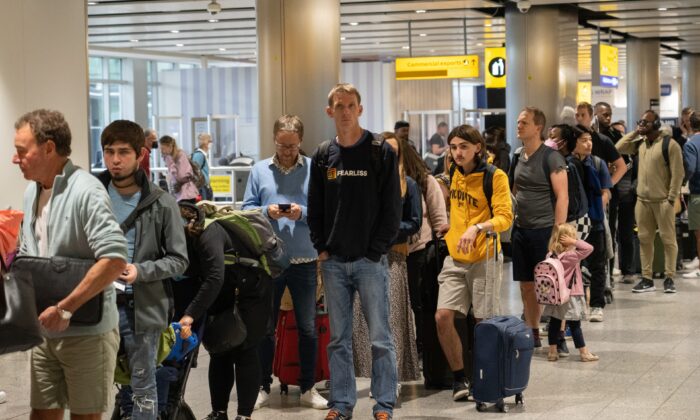 London’s Heathrow Airport has announced it will extend its cap on passenger numbers for another six weeks, as the UK’s travel sector continues to struggle to cope with the rising demand for travel.

The capacity limit of 100,000 daily departing passengers was initially to last until Sept. 11, but the airport said that date has been pushed back until Oct. 29 “to support more reliable and resilient passenger journeys.”

Heathrow said the cap imposed in July had resulted in “fewer last-minute cancellations” and “shorter waits for bags.”

It added the capacity limits would be kept under review and “could be lifted earlier should there be a sustained picture of better resilience and a material increase in resourcing levels.”

Britain’s aviation sector has been hit by severe disruptions in recent months. Tens of thousands of flights have already been cancelled this summer and many passengers have suffered from long security queues and baggage system breakdowns.

The sector has been struggling with serious staff shortages. Airlines and airports made thousands of employees redundant during the COVID-19 pandemic, but are now struggling to recruit new workers and have their security checks processed.

“We want to remove the cap as soon as possible, but we can only do so when we are confident that everyone operating at the airport has the resources to deliver the service our passengers deserve,” he said.

Airlines have expressed disappointment over Heathrow’s decision to extend the cap.

A Virgin Atlantic spokeswoman said: “Airline customers have a right to expect their bookings will be honoured and we’re doing everything in our power to minimise disruption, getting our customers to where they need to be smoothly.”

The airline urged Heathrow to “provide a comprehensive plan for returning to normal operations as soon as possible.”

Ryanair, a Dublin-based budget airline said it will add more than 500 flights from Stansted, another London airport, during the October half-term school holiday, which will serve up to 100,000 passengers.

Ryanair chief executive Michael O’Leary said: “While hopeless Heathrow continues to mismanage air travel, Ryanair and London Stansted will continue to grow and deliver for London families, the way we have through all of summer 2022.”