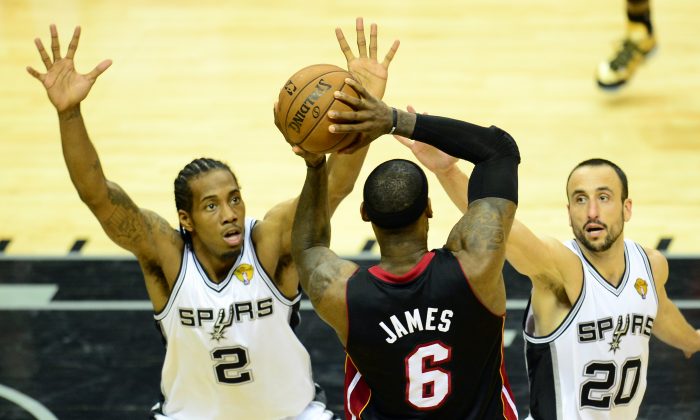 LeBron James of the Miami Heat looks to pass under pressure from Kawhi Leonard and Manu Ginobili of the San Antonio Spurs during game 5 of the NBA finals on June 16, 2013 in San Antonio, Texas., where the Spurs defeated the Heat 114-104. The Heat must win Game 6, or the series is over. (Frederic Brown/AFP/Getty Images)
NBA

Heat With Backs Against the Wall in Game 6

This is it for the Heat. Down 3-2 in the series, the defending champions, winners of an NBA-high 66 games in the regular season, have no room for error in tonight’s Game 6—and they’ve made plenty of errors thus far.

The Heat’s biggest problem has been lack of consistency—especially on defense. Miami has come to play in Games 2 and 4, yet has looked completely out of it in Games 3 and 5. While they are scheduled for a bounce back game tonight, past history is certainly no guarantee of future results.

What do they need to do to win? Here are three keys to extending this series to a seventh game:

1. Shore up the defense. Chief among the Heat’s errors has been losing Danny Green on the perimeter. Granted, Green has been ridiculously hot this series, but all too often he has been in rhythm when he catches the ball instead of having to fight around screens and defenders to get there.

If the Heat play with the same passion they played with through most of the regular season, they should be fine. It’s been hit or miss this series though.

2. Turn turnovers into fast breaks points. Both LeBron and Wade blew fast break opportunities in the pivotal third quarter of Game 5, while the game was still in reach.

This is Miami’s biggest advantage and they blew it, and consequently the game—the Spurs turned the ball over 18 times in Game 5 and still won by double-digits.

3. Bring Mike Miller off the bench and start Shane Battier. Miller hit all five three-pointers in the Spurs’ Game 3 blowout win and was the Heat’s lone bright spot off the bench. But after starting him in Games 4 and 5, Miller has scored a grand total of zero points (in 46 minutes he’s attempted just two shots) while the team has had mixed results in those games.

Maybe Miller is just better off the bench and if the Heat want to stay small, they should start the defensive wizard Battier instead. It doesn’t mean Battier plays 30 minutes, it just keeps Miller in his successful routine.

For the Spurs, they need to put this away tonight. Since the advent of the 2-3-2 home-away format in 1985, no team has won Game 7 on the road. Here are the keys for a San Antonio win:

On a team with offensive options like Duncan and Parker, the Spurs should keep running the offense through those two and let Green’s threes continue to come when the defense collapses.

2. Limit the turnovers. San Antonio got away with 18 of them in Game 5, but shot 60 percent from the floor to more than make up for it. They can be much better in the ball control department, as evidenced by an NBA-Finals record-tying low of four in Game 1.

3. Bring Ginobili off the bench. Ginobili was brilliant when Popovich finally started him in Game 5. Part of the reason was the surprise of inserting the former Sixth Man of the Year into the starting lineup. Now that Popovich has the Heat on their heels, he should change it up again, and bring Ginobili off the bench—yet play him starters’ minutes as usual. Always stay a step ahead of the opponent.