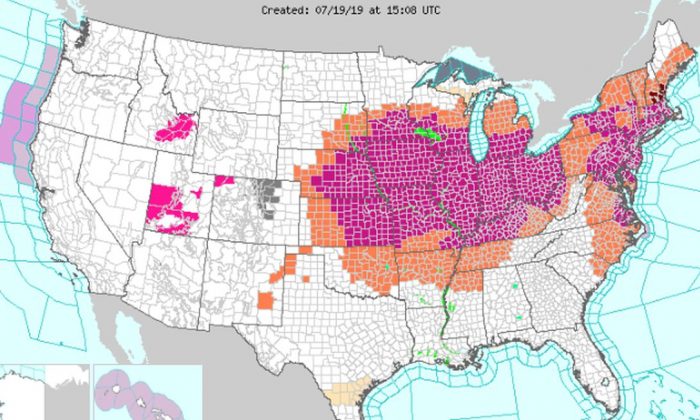 Much of the East Coast is under heat warnings or advisories. (NWS)
US News

A heatwave is slated to impact much of the United States in the coming days, affecting an estimated 100 million people in parts of the eastern and central portions of the country.

“Over the next few days, there will be little relief at night as low temperatures in many places, particularly cities along the I-95 corridor, will struggle to see lows dip below 80 degrees at the height of the heatwave, which will bring the hottest weather in years,” AccuWeather said on July 19.

The heat will be combined with severe humidity that will last through Saturday in the Midwest and through Sunday in the Northeast, the private weather forecaster said.

Look at the impressive and widespread coverage of #heat related warnings and advisories across the Eastern two-thirds of the country. The hazy, hot and humid conditions will persist through the weekend. Be smart and stay cool! #HeatSafety pic.twitter.com/hemIJ79rOr

The U.S. National Weather Service (NWS) noted on Twitter that there were a bevy heat-related warnings and advisories sent out by local offices across the eastern two-thirds of the country.

The conditions were described as “hazy, hot, and humid.”

In explaining the weather pattern, the NWS said that a “large ridge of high pressure extending from the Central to Eastern U.S. will deliver a dangerous summer heatwave through the weekend.”

[730 AM] Our latest briefing package on the upcoming excessive heat can be found at this website. An Excessive Heat Warning is in effect starting at noon today with heat index values forecast to be around 105° to 110°. https://t.co/4cy6qL3V7C pic.twitter.com/YP7bn5nX1Q

“A number of record highs and overnight warm minimum temperatures are likely. Heat indices will surge past 100 degrees and approach the 110s” in Fahrenheit, the agency continued.

A dangerous heat wave is expected from the Plains to the Northeast to end this week. This heat could be deadly in a few spots. Details: https://t.co/ks2Rb6ZaGa pic.twitter.com/WcFUhSQ800

“For a time, it may feel just as hot in Washington, D.C., as Death Valley, California. While the actual temperature may be higher in Death Valley, when compared to the nation’s capital, humidity levels near the Chesapeake Bay will be substantially higher than that of the deserts,” AccuWeather explained.

In New York, Mayor Bill de Blasio ordered tall office buildings to turn up their thermostats to 78 degrees amid the heatwave so as to avoid straining the power grid.

An outbreak of #severe t-storms, including the threat of #tornadoes and widespread damaging winds, possible today and tonight in the upper Midwest. https://t.co/YcaPYvYtL1 pic.twitter.com/Tx93SAbiSs

“We are about to enter a heat emergency, and must do all we can to keep New Yorkers safe,” said Mayor de Blasio, reported the New York Post. “The City government is limiting its energy use to reduce strain on the electrical grid, and now private office buildings will also have to do their part.”

To complicate things, the Midwest is bracing for potential tornadoes amid the scorching temperatures. Two tornadoes were already reported Thursday in South Dakota, ABC News reported.