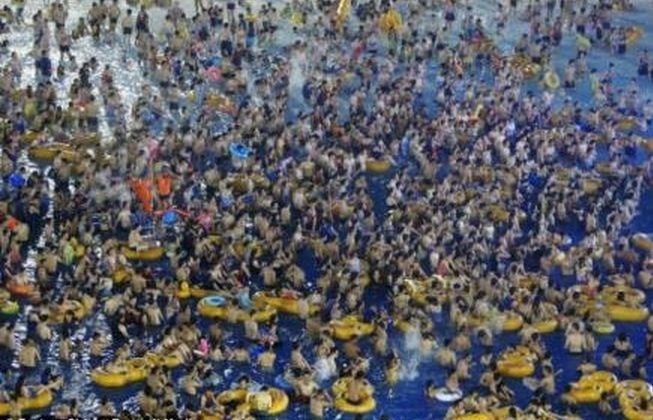 Nanjing citizens escape from hot weather in a swimming pool in picture published on the microblog platform Weibo. (Weibo)
China

As of July 29, daily highs exceeding 104°F were reported in 43 cities and counties of southern China according to the National Meteorological Center of the China Meteorological Administration (CMA). At least 10 heat-related deaths have been reported after high temperatures blanketed 19 provinces in southern China since the beginning of July, according to several Chinese media.

As of 2 p.m. on July 30, at least a dozen cities had been hit by record-high temperatures for more than 10 consecutive days.

Among them, the city of Changsha in Hunan Province registered the longest period of record-high temperature for the summer thus far at 39 days, breaking its previous record. It was closely followed by the city of Chongqing in Sichuan Province, with 30 days, and the city of Shanghai with 24 days, according to the Changsha Evening newspaper.

Journalists at Shanghai Television Station demonstrated that they were able to cook a large piece of meat on the ground just outside their building in only 10 minutes. Photos of raw bacon and fish cooking on the ground have also appeared on many Chinese websites.

Perhaps the local authorities were not pleased by the TV station’s reporting. On Aug. 1 the Shanghai city administration stated that broadcasting high temperature weather without the authorities’ permission is illegal and can be fined a maximum of 50,000 RMB (US$8,160) according to the mainland-China based website Sina.com.

Continuing high temperatures have caused a spike in the number of patients suffering from sunstroke, which is heatstroke caused by exposure to the sun. Deaths from heatstroke have been reported in multiple cities, including Shanghai, Nanjing in Jiangsu Province, and Shaoxing in Zhejiang Province.

Signs and symptoms of heatstroke include high body temperatures over 104°F, dry skin, confusion, disorientation, and central nervous system abnormalities such as delirium, convulsions, or coma. The mortality rate for heatstroke victims can be as high as 50 to 70 percent without immediate treatment.

The number of heatstroke victims increases with indoor victims accounting for 30 percent, and at least 10 people have died of nonexertional heatstroke, reported the China News online service (Chinanews.com).

“Recently there have been more heatstroke victims than before being taken to hospitals by ambulance, possibly due to the high temperatures in Shanghai these days,” the report quoted Shanghai Municipal Center for Disease Control and Prevention as saying.

According to Zhejiang Online (www.zjol.com.cn), the Second Municipal Hospital of Shaoxing in Zhejiang has been receiving over 10 heatstroke victims daily, some of them being monitored and treated in the intensive care unit.

The month-long heat wave is expected to continue for at least another 10 days, CMA said on July 30. Daily temperatures in many areas in southern China are expected to surpass 95°F through August 8, and some cities south of the Yangtze River may experience record breaking highs, according to weather forecasts in those regions.

Translated by Euly Luo. Written in English by Barbara Gay.