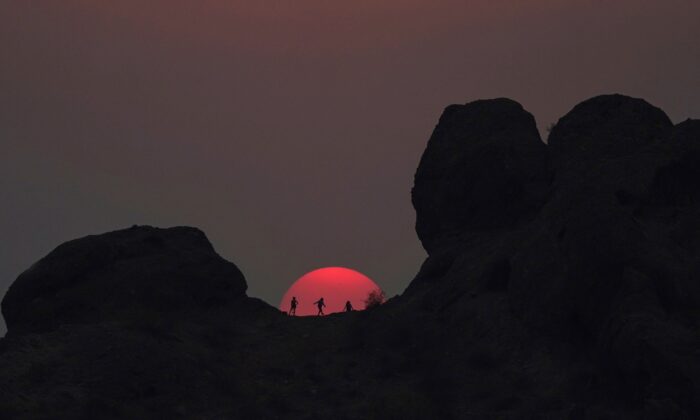 Millions of people in a large swath of the western United States are bearing an unusually early and enduring heatwave with temperatures in some places breaking or matching historic records.

Phoenix tied a record for the second day in a row with 115 degrees. The city is expected to heat up to 117 degrees each of the next two days, according to the National Weather Service. Palm Springs hit a high of 120 degrees on Tuesday.

The heat is expected to last until at least Sunday. High atmospheric pressure is believed to be contributing to the scorching weather.

In California, the operator of the state’s power grid asked residents to voluntarily conserve power for a few hours Thursday evening to relieve stress from the grid. CEO Elliot Mainzer said the grid was stable and there was no expectation of rotating power outages, but that could change as temperatures spike in the coming days.

The heatwave also impacted the normally temperate San Francisco Bay Area. Triple-digit heat was forecast in Denver, which saw a record high of 101 degrees Tuesday. The weather service issued an excessive heat warning for parts of western Colorado, most of which is experiencing extreme drought conditions.

The region is expected to remain at 113 degrees or hotter through Sunday, National Weather Service meteorologist John Salmen said, and still could top the all-time local high of 117 degrees, set June 20, 2017.

New Mexico also experienced more record-breaking highs. But a possible respite was in sight with showers and thunderstorms expected in parts of the state.

In Montana, temperatures over 100 degrees have made it tougher to fight wildfires that have exploded in size, triggering evacuations and destroying an undetermined number of homes. Furious winds have stoked the flames and forced the crash-landing of a firefighting helicopter.

At least 14 new fires have been reported in Montana and Wyoming since Tuesday.

The dry weather was also being felt in Idaho, where authorities are preparing for a potential wildfire season.

Nearly 80 percent of Idaho is in drought and the rest will likely experience it in the coming months, Nick Nauslar, a meteorologist with the National Interagency Fire Center, told state officials this week. Idaho had its second-driest spring in the last 126 years, Nauslar added.