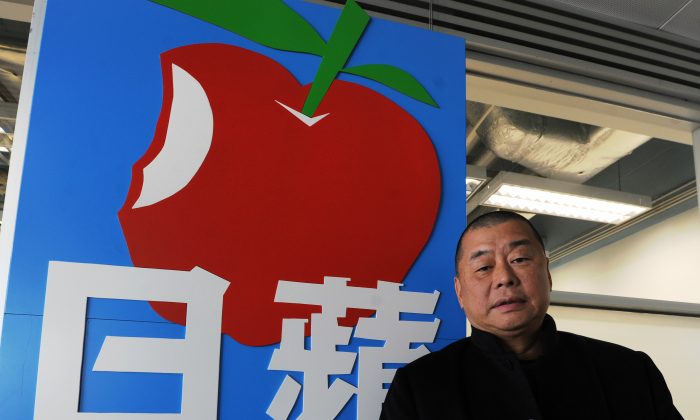 Jimmy Lai stands outside the headquarters of his Next Media company, on Feb. 7, 2011. (Mike Clarke/AFP/Getty Images)
China

HONG KONG—Since 2003 the Chinese Communist Party has sought to drain the lifeblood from Hong Kong’s independent media by denying them advertising revenue. At the end of last year, three banks withdrew advertising from Hong Kong’s Apple Daily in what appears to be the most recent example of this strategy.

In an interview with Radio Television Hong Kong (RTHK) Jimmy Lai, the CEO of Next Media, which owns Apple Daily, said that HSBC, Standard Chartered, and Bank of East Asia had together withdrawn advertising worth HK$200 million. Around this same time, several mainland companies also withdrew advertising that on an annual basis amounts to HK$10 million from the newspaper am730.

The head offices in the United Kingdom of HSBC and Standard Chartered refused to comment on why the advertising was withdrawn from Apple Daily.

Sources in the financial sector in Hong Kong say the banks were responding to pressure from the top, meaning Hong Kong chief executive Leung Chun-ying.

Next Media’s director Ip Yut Kin said that the company had no direct evidence as to why the three banks had withdrawn their advertising and it was not appropriate for him to respond. However, if it were true that the advertising had been withdrawn due to political pressure, “this is unfair to Apple Daily, a brutal, low-class practice,” Ip said.

The news website House News reported last week that Leung Chun-ying and the ultra-leftist councilors surrounding him have sought to suppress media outlets that dare to criticize the government and the Chinese Communist Party (CCP) by using intermediaries to pressure large enterprises to withdraw advertising.

Commercial Radio show host Lee Wai-ling recently reported an example of such pressure. Kerry Properties, held by the family of the boss of the South China Morning Post, Malaysian businessman Robert Kuok Hock Nien, took out a full-page advertisement on the A3 page of the Jan. 3 edition of Apple Daily in order to sell Kerry’s new property, The Summa.

But the people around Leung Chun-ying called the head of Kerry Properties and the contract to run the ad in subsequent editions was immediately canceled.

Several leading banks that are not Chinese-funded have received special attention. If the banks do not comply, the Leung government has retaliated by giving them a cold shoulder, according to House News.

The executive editor of Hong Kong’s Open Magazine, Ms. Cai Yongmei, told Epoch Times that the July 1 march in 2003 prompted the CCP to increase the pressure it was already putting on Hong Kong’s media. Half a million people took to the streets to oppose the CCP’s proposed “anti-sedition” measure, Article 23. The CCP was shocked, and attributed the huge turnout to the efforts of Hong Kong’s media in fanning the flames of resistance.

This year the political stakes are again high. Political reform is imminent, the procedure for electing the chief executive is up for discussion, and the Occupy Central movement promises protests demanding universal suffrage.

Cai said the CCP is taking a lot of measures to try to deter the action of Hong Kong citizens. One very important step involves CCP seeking to further suppress and control Hong Kong’s media.

Since Jimmy Lai had no businesses on the mainland that could be used to gain leverage over him, the CCP and Leung have resorted to controlling the Apple Daily by denying it advertising, Cai said.

“How can you intervene in people’s advertising,”Cai said. “This is an act of a totalitarian government. Hong Kong is a free economic system. How could government interfere in marketing behavior? This is interfering in a free economy through administration—it is very, very bad.”

In his interview with RTHK, Jimmy Lai was asked if he would sell his business if someone offered high prices for Apple Daily and Next Magazine.

Jimmy Lai answered that if he sold Next Media, he could not escape the notoriety of being a coward without a backbone. He does not want his descendants to say in the future, “my Dad was very rich but he was a coward.” So, no matter how much money is offered, he said he will not sell.