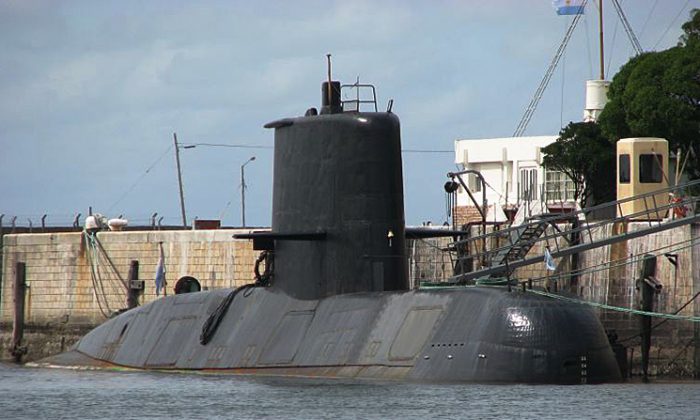 The Argentine submarine ARA San Juan, S-42, docked before a mission. The sub has been missing since Nov. 15, 2017. (en.wikipedia.org)
Americas

A missing Argentine submarine’s crew is slated to run out of oxygen on Wednesday amid reports of the discovery of the vessel’s heat signature.

The ARA San Juan went missing in the South Atlantic Ocean last week about 200 miles from the city of Puerto Madryn.

A large heat signal was found, and search planes and ships were sent to determine whether it’s a false alarm or not, according to the Daily Mail. A U.S. Navy aircraft detected a “heat stain” from 230 feet below the surface of the ocean. A rescue vessel also reported hearing a sonar signal.

The United States, Britain, and three other countries are helping Argentina search for the missing submarine.

“Oxygen is a permanent worry. Every day that passes is more critical,” naval commander Gabriel Galeazzi said at an evening news conference in Mar del Plata, according to the Evening Standard.

More than a dozen boats and planes from Argentina, the United States, Britain, Chile, and Brazil are searching.

If the German-built submarine had sunk or was otherwise unable to rise to the surface since it gave its last location on Nov. 15, it would be using up the last of its seven-day oxygen supply, according to Reuters.

“We are in the critical phase…particularly with respect to oxygen,” Balbi told reporters. “There has been no contact with anything that could be the San Juan submarine.”

Around 30 boats and planes and 4,000 people from Argentina, the United States, Britain, Chile, and Brazil have joined the search for the submarine, which last transmitted its location about 300 miles from the coast.

Just catching up on this #ARASanJuan story and it sounds insane. Submarine w/ 44 Argentinian sailors went missing 6 days ago. Sonar is picking up sounds of they think are sailors banging. They might only have 1 day of oxygen left. Hope they can be rescued.

Planes have covered some 190,000 square miles of the ocean surface, but much of the area has not yet been scoured by the boats.