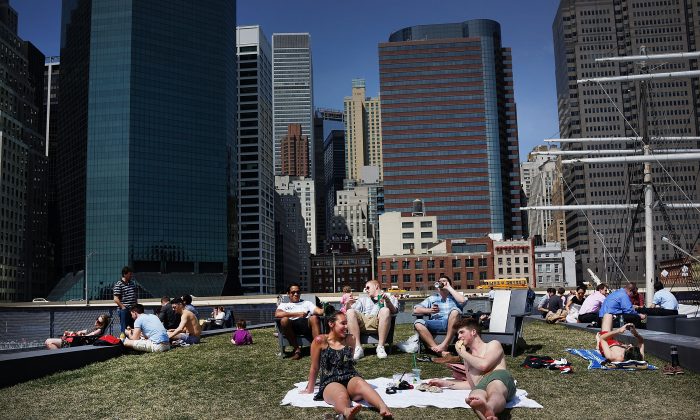 People relax along the East River in lower Manhattan during warm weather on April 9, 2013 in New York City. For the first time since October, temperatures are expected to rise above 70 degrees this week in New York and surrounding areas. (Spencer Platt/Getty Images)
New York

Researchers at Columbia University project in a new study that higher and more extreme temperatures expected in the coming years will lead to more residents of Manhattan suffering.

Deaths linked to a warming climate could rise some 20 percent by the 2020’s and, “in some worst-case scenarios, 90 percent or more by the 2080’s,” according to the researchers in a study summary.

The team was made up of researchers from Columbia’s Earth Institute and Mailman School of Public Health.

The researchers say that the study is one of the most comprehensive looks at how the expected rising temperatures will affect a city, with data from all seasons and application to multiple scenarios.

“This serves as a reminder that heat events are one of the greatest hazards faced by urban populations around the globe,” said coauthor Radley Horton, a climate scientist at the Earth Institute’s Center for Climate Systems Research, in the study summary. Horton said potential dangers are seen in the record heat waves in the last decade, including the 2010 heat wave in Russia that killed around 55,000 people.

At the same time, the last several years attest to the unpredictability of the weather, too, with a warm winter in 2011 but an extended one, with much of March still cold, in late 2012 going into 2013.

“I think this points to the need for cities to look for ways to make themselves and their people more resilient to heat,” said senior author Patrick Kinney, an environmental scientist at the Mailman School and Earth Institute faculty member.

Some factors are uncertain, including how much those living in Manhattan age as a whole, and how well the city adapts infrastructure, such as continuing to make roofs more reflective.