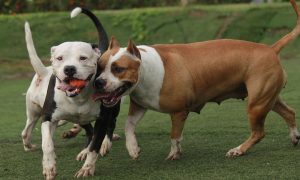 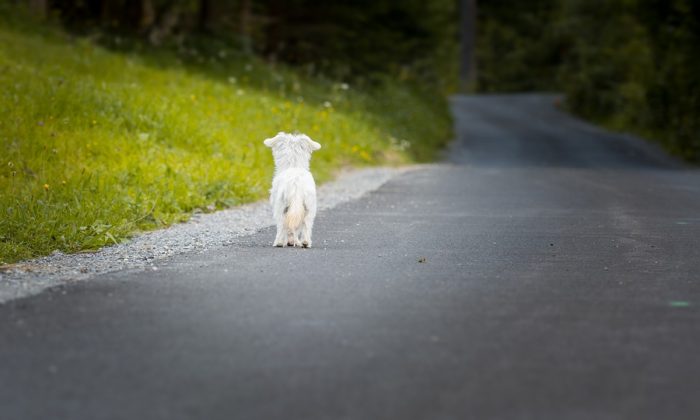 Stock image of an abandoned dog. (Pezibear/Pixabay)
US News

A heartrending video of a dog chasing a van that abandoned him on a road in Milton, West Virginia, on Sept. 1 has been gaining thousands of views on Facebook, with good Samaritans coming forward to help.

Bob Edmonds saw a dog being dropped off from a car at East Mud road in Milton on Sunday morning. The vehicle speedily drove away as the visibly perplexed dog kept chasing it down the road.

Edmonds shared the heartrending video and a picture of the chocolate Labrador chasing the car on his Facebook page. Since being posted on Sunday, the video has gained over 149,700 views.

Edmond shared an update along with the video and the picture. He wrote: “HE HAS BEEN FOUND SAFE! He is in safe hands now … Thanks, everyone. If anyone knows this vehicle that travels East Mud Road in Milton, WV, tell them to come get their dog they just dropped off.”

According to WSAZ, the dog was found by Stephanie Elswick, a volunteer rescue worker who drove over 11 miles, all the way from her home in Barboursville on Monday morning and searched for the dog.

Elswick felt extremely troubled after seeing the video and couldn’t sleep that night. “I saw it, and I had to help,” she told WSAZ.

She found the dog tied in a neighbor’s yard about a mile from where the video was taken. “I asked if it was their dog,” she said. “They said no. They’d found him in the road and tied him up to keep him safe.”

She said the dog is healthy and friendly and it’s difficult to understand why someone would abandon him. “Just don’t throw them out in the road like this to fend for themselves,” Elswick said.

The dog is currently at Huntington Cabell-Wayne Animal Shelter and anyone with any information about the driver can contact the shelter’s Facebook page and ask for Rutherford. Alternately animal control can be contacted on (304) 696-5551.

What Happens When You Abandon a Dog?

Wag, a canine services website, says dogs have the capacity to feel emotionally the way humans do when they are abandoned.

“Imagine being left to wander the streets or navigate life in the Everglades, where other animals make their home. Deserted dogs face this dilemma every day and those that are rescued carry the scars,” said a post titled “Can dogs feel abandoned?” on Wag.

IFL Science mentions that when a dog is left alone it begins to face a lot of stress. “When stress levels increase—a dog’s heart rate, respiratory functions, and levels of stress hormones, such as cortisol—are also likely to rise,” the Canine Behaviorist and Welfare Team (CBWT) told IFLScience.

“The first 30 minutes after being left alone is usually the most stressful time for the majority of dogs,” they note. “However, for some individuals, this elevated level of stress can last for the whole time that they are left,” said CBWT.

IFLScience says that dogs can never get used to being left alone. “Dogs are social animals, so it is difficult to know for sure what they’re thinking when they’re left alone,” the CBWT added.

How to Help an Abandoned Dog?

AnimalWised, an animal content website, says that the first thing to understand when one finds an abandoned dog is that it will be very scared. Take care in approaching it—don’t be invasive or antagonistic.

“If they have a traumatic experience they may react negatively, try to flee, or even act aggressively,” said AnimalWised.

It says when owners abandon their dogs in remote areas, the pets feel very disoriented and confused as they don’t even have a smell trail to follow to reach home.

AnimalWised says that when one finds a deserted dog, one needs to inform the local authorities since one does not have the right to trespass.