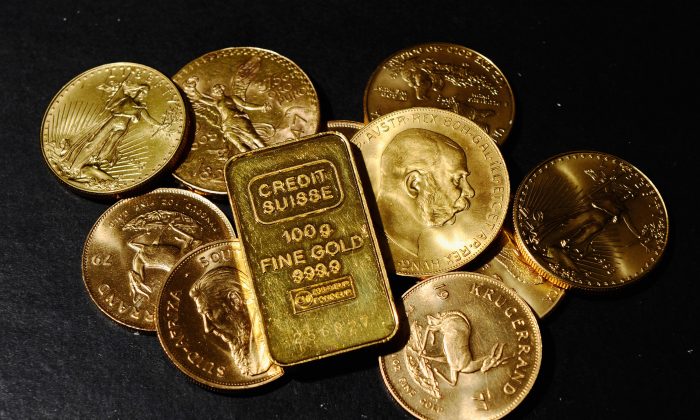 Gold coins on sale in Los Angeles on Nov. 9, 2010 as the price of gold hit a record high of $1,400 per ounce. Gold coins similar to these were uncovered by an anonymous couple February 2013 in Northern California. It's estimated that the mysterious coins could fetch $10 million at auction as the coins represent both a precious metal and rare collectible items. (Kevork Djansezian/Getty Images)
US

It could be hard to believe that the romantic and fantastical notion of discovering buried treasure in America in the 21st century is actually possible. But, that is precisely what happened to a couple last year in the California Gold Country.

The couple decided to walk a route through their property near Saddle Ridge, Calif., that they had walked many times before. Only this time they discovered an odd can sticking out of the ground. Soon the couple uncovered a total of seven odd cans, and inside a total of 1,427 gold coins.

The coins date from between 1847 and 1894 and are mostly $20 pieces that are worth approximately $28,000 at face value and could fetch $10 million dollars total today at auction, according to Tribune Newspapers.

The couple has decided to remain anonymous and only revealed their story last month after the coins had been removed, cleaned, authenticated, and cased. But, the mystery remains as to how the coins came to be buried on the couple’s property.

A popular theory suggests the coins were part of the 1901 San Francisco Mint theft in which $30,000 in $20 coins was stolen and never recovered. Chief Clerk Walter Dimmick served time in San Quinton Prison for the theft.

“We do not have any information linking the Saddle Ridge Hoard coins to any thefts at any United States Mint facility,” US Mint spokesperson Adam Stump told CNN.

Another theory suggests that the coins are related to the activities of the subversive Confederate group the Knights of the Golden Circle, who are believed to have buried treasure across the United States.

A third theory says it could simply be the buried fortune of a businessman. Or even that the person who buried the hoard buried the stash over many years in order to keep it safe. Many people claiming that the treasure belonged to relatives who once owned the land have come forward, but so far there haven’t been any verified claims to the fortune.

Thirteen of the gold coins are the best in any collection. One in particular is a rare 1866 $20 piece minted in San Francisco that is missing the phrase, “In God We Trust.” This one coin alone could fetch $1 million or more.