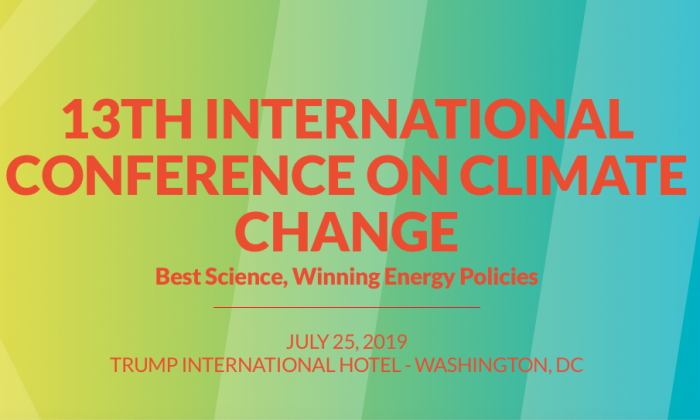 (Courtesy of The Heartland Institute)
US News

The Heartland Institute, a public policy organization and free-market think tank, will be holding its 13th Annual International Conference on Climate Change on July 25, 2019, in Washington, D.C.

The conference will host researchers and speakers with the goal of informing our governing officials, policymakers, and the public about the reality behind climate change during the current “global warming scare.”

The Heartland Institute’s annual International Conference on Climate Change seeks to discuss the truth about climate and the environment by analyzing the facts proven by science.

James Taylor, a senior fellow for environment and energy policy at Heartland Institute, explained to The Epoch Times, “These conferences bring together many of the leading experts regarding climate science, energy economics, and public policy.”

He explained that there are many goals to the International Conference on Climate Change. The conference aims at presenting the most recent information regarding climate to policymakers and to bring together some of the leading experts on the issue of climate change.

“We think these conferences have played a tremendous role in calling public attention to climate realism, and the evidence that strongly suggests that people are not creating a climate crisis,” said Taylor.

The institute hopes discussions from the conference will positively assist the Trump administration in making decisions regarding the environment and climate.

According to the event announcement, the conference will also feature in-depth discussions about policies such as the Green New Deal and issues such as the current war on fossil fuels.

Taylor elaborated that the Heartland Institute has been involved with climate change and policies involving our climate and environment, among other topics and areas, for a long time.

Taylor explained that while temperatures have risen over the past 100 years, the idea of a human-made climate crisis is disproven by science, because temperatures have been continuously rising since the Ice Age. Earth is simply not facing a crisis or threatened by substances like carbon dioxide as some people claim.

“The most prevalent greenhouse gas is actually water vapor, which is something that humans don’t have any control over, to the extent that emissions caused by humans with the most effect on climate, carbon dioxide would be the most significant one,” said Taylor.

According to the National Climatic Data Center (NCDC), water vapor is the most abundant greenhouse gas and works by absorbing thermal infrared energy from the Earth, causing further warming of the atmosphere and warmer global temperatures.

Taylor explained that carbon dioxide is actually necessary for plant growth and for plant life to create sugars for itself to use as food and release oxygen into the atmosphere.

This year, the Heartland Institute will continue the discussion on climate by examining policies including the Green New Deal during their 13th annual conference.

The Green New Deal, introduced February 2019 and died in the U.S. House of Representative, was met with much criticism regarding its economic and environmental impacts. Taylor explained that the Green New Deal would harm United States economics because the cost of implementing such a plan would create budget deficits.

The proposal was promoted as a “broad proposal to reduce greenhouse gases and move the nation to 100 percent renewable energy,” according to a CBSN article. Yet, the bill includes issues unrelated to environment or climate, such as “high-quality health care” and “adequate housing,” as part of the Green New Deal.

Taylor noted that the Green New Deal was simply a proposal that would lead to a “socialist makeover or takeover of the American economy.”

Given the importance of our environment, conversations about climate will continue to occur as Earth undergoes unceasing cycles and changes.

“I think it’s good for scientist to have concern when things are changing regarding the environment, especially if there’s some human role in it. But being cautious in terms of monitoring the evidence, does not mean that we jump to rash conclusions about a so-called “climate crisis,” especially with the proposed solutions would have a tremendously negative impact on human living standards and also on the environment,” Taylor said.