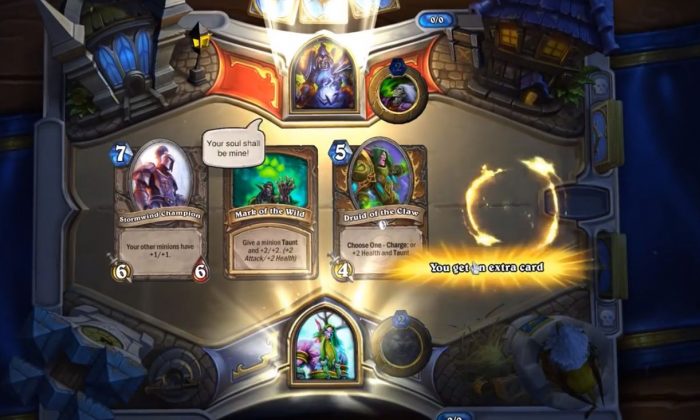 A YouTube video shows the gameplay of "Hearthstone."
Tech

Hearthstone Beta Key, Release Date: Game to be Out in December

“Hearthstone: Heroes of Warcraft,” a free card game offered by Blizzard, will enter its open beta next month ahead of a release date slated for 2014.

Blizzard chief Rob Pardo last week made the announcement, saying the beta begins in December, but as IGN notes, the game could be released in January.

There will also be Android and iPhone versions of the game.

A number of people have been trying to get beta keys over the past few weeks, but the open beta in December won’t require them, reports say. The keys stopped being given out as of late October.

“We feel pretty good with the nine heroes we have right now,” Chayes told Gamespot. “In terms of expanding beyond that, that’s definitely feedback we’ve gotten from the beta.”

He elaborated: “People have given us a lot of feedback, like ‘yeah, it would be awesome if I had a different hero I could pick from, a different Warrior, a different Priest.’ In terms of how we actually go and add that in as a separate feature, it’s still a little too early to say. We’re focused on making the nine core heroes that we have right now feel awesome, but that’s definitely something that we’ll be thinking about as we move into the next phase of our roadmap.”

Blizzard developers said that a ranked system is being worked on. According to Joystiq, the game has 25 ranks and as one wins more matches, they will get ranked higher.

Blizzard said that more than 1 million players have participated in the closed beta, while around 44 percent of people who reached the top tier did not pay any money.

There also appears to be a single-player version of the game that will be included, but details of this are not clear.