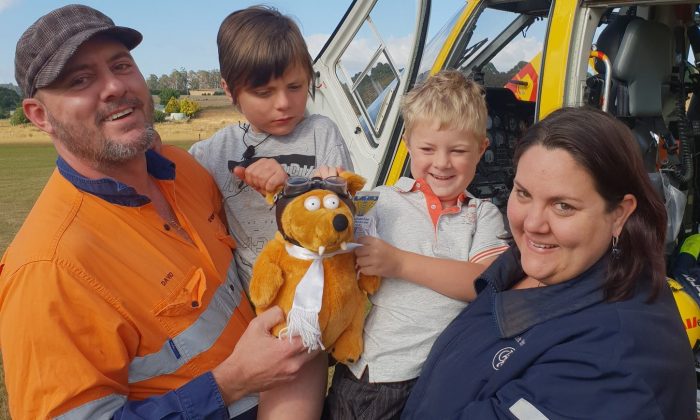 Robert Wright (centre R) with his family after the Tasmania State Emergency Service rescued him at Denison Gorge, Australia, on Feb. 1, 2019. (Courtesy of Tasmania Police)
Australia

A Tasmanian child’s emotional return home from an overnight escapade has captured the hearts of many people.

Tasmanian Police confirmed at 5 a.m. local time on Feb. 1 that Robert Wright was “safe and well” in Lebrina, 38 kilometres (23.6 miles) north of Launceston.

“Bob went missing last night and an extensive search located him uninjured around 8.15am this morning,” a police spokesperson said in a Facebook post.

Bob, who suffers from autism, went missing last night and an extensive search located him uninjured around 8.15 a.m. this morning.

Sergeant Michael Gillies thanked the many volunteers who assisted in the search for Bob, and the many other people who offered support.

Bob’s family are overwhelmed with happiness and extremely thankful for everyone who joined in the search.

Tasmania Police are currently searching for a missing 7-year-old boy at Lebrina in the State’s North-West.

Police are asking anyone who may have been in Lebrina area and seen a child who is described as having long hair, and was wearing a… https://t.co/c0FbG5zHYZ

The SES team spotted Bob a little after 8 a.m. local time after noticing a piece of clothing and a shoe in dense bushland at Denison Gorge, about 4.5 kilometres (2.8 miles) south of Lebrina.

The entire search process attracted quite a following on social media where other parents with autistic children found a chance to express their challenges of parenting.

“The look on the mums face as she touched her son says it all. From a fellow Autism mum to another set of parents, I send much love to [yo]ur family for your baby boy that has been found safe,” Elise Chilcott-Rockliffe commented on Facebook. “No one except us know what it is like to call out to a child that will not respond back to us if they wander off. It’s blood curdling cold feeling and I’m so happy for u that he is safe and well.”

“Thank goodness. I have a little autistic absconder as well. Him wandering away is my worst fear,” Lorri Ellison said on Facebook. “I’m so very relieved for this family he’s been found safe and sound.”

Other parents offered to help counsel Bob’s parents on their experiences in raising an autistic child and share their wisdom.

“We have an autistic little boy as well and this is our worst nightmare. Our boy loves water and will B-line to it in a heart beat,” Dwain Evans said on Facebook. “Tasmania Police please look where there is water near his house as he may be the same as our boy. Bath tub animal water, dams, rivers etc. I hope you find him safe and well. If his parents need to talk to someone who understands send me a PM.”

“Dwain Evans, [I am an] autism mum here too. Exactly what has been going through my mind,” Dana Mathews replied on Facebook. “You’re very kind to offer your support.”

Sergeant Michael Gillies thanked the many volunteers who assisted in the search for the boy, and the many other people who offered their support.

“The family are overwhelmed with happiness and extremely thankful for everyone helped with the search,” he said.

Many fans left Facebook comments, praising the SES for finding the boy.

“As the mum of a boy who went missing in bush land once, not that long ago, my thoughts are with his loved ones,” Tania Lockwood said. “Those helicopter guys are the best at their jobs.”

“Amazing work from the SES guys who kept searching throughout a long cold night,” Ess Anala said. “Kudos to the chopper crew—simply brilliant at what you do. Well done everyone.”

“Thank you to everyone involved with the search and especially Tasmania Police,” Grub Wright said.

Another thanked the first responders. “Well done to all the SES volunteers and to Tas pol terrific outcome,” Trev Jurgens said.

Many worried mums also chimed in on the good news.

“Oh thank god, poor little guy, glad his safe and home with his family who must be so relieved,” Kathleen Turner said.

“Excellent news, was worried sick for him and his parents,” Shell Zoe Elmer said.

Also, a much older Bob, with the same name as the missing child, said he was was relieved the boy had been found.