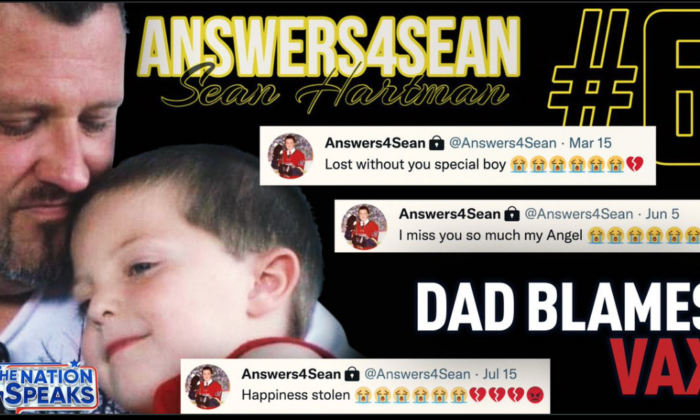 Dan Hartman wants answers about the death of his son, Sean, who passed away at age 17 on Sept. 27, 2021. Sean was vaccinated for COVID-19 on Aug. 25, 2021, because he wanted to be able to continue playing his beloved hockey. (Screenshot/NTD's The Nation Speaks)
Canada

Dan Hartman is sure that his hockey-loving son died from a COVID vaccination, but he’s being told very little about what happened. The Ontario dad says he wants answers about the sudden death of 17-year-old Sean.

“I cannot grieve him properly without the truth. It’s different if someone dies in a car accident or disease or suicide. This is none of them—this is unknown,” said Hartman in an interview on NTD’s “The Nation Speaks” program aired on July 30.

According to the Beeton Athletic Association Cash Draw’s tribute to Sean, he began playing hockey at age 5 and went on to play for the TNT Tornadoes in New Tecumseth, Ontario, for three years before returning to his hometown of Beeton in his major Bantam year.

Due to the COVID-19 pandemic, the Ontario Minor Hockey Association implemented a policy that required players aged 12 and over to be vaccinated or risk not being able to play.

Hartman said that Sean decided to get the shot last August in order to continue playing, as hockey was his passion. In Ontario, there is no minimum age of consent under the Health Care Consent Act, which means youth of Sean’s age can get vaccinated without parental consent.

“So on August 25, he had the Pfizer vaccine. And on August 29, he went to the emergency [room]—he had brown circles around his eyes, and a rash and he was vomiting,” Hartman said.

Hartman, who launched #Answers4Sean on Twitter last October with the subtitle “Looking for TRUTH for Sean Hartman,” said the autopsy report, completed in December 2021, stated that the cause of Sean’s death was “unascertained.”

“He was a perfectly healthy boy. He had no underlying conditions,” Hartman said. “They don’t know why he died. Nobody can tell me why he died. And I asked the coroner, ‘can you tell me 100 percent it wasn’t the vaccine?’ And he said ‘no.’”

Not satisfied with the lack of answers, Hartman sent the autopsy report to a pathologist, who told him that, based on his assessment, he believes Sean died from the vaccine.

“He said in his opinion, it is the vaccine. He can’t say 100 percent either, but he said in his professional opinion, it was,” Hartman said of the pathologist, who wished to remain anonymous.

Hartman added that the emergency room doctor who treated Sean even said in the autopsy report that his death could be the result of a reaction to the vaccine, yet did not order any blood tests.

“In my opinion, [the emergency room doctor] didn’t do his job. I’m not saying it would have saved Sean’s life, but it certainly might have if they would have found something,” said Hartman, who has been a truck driver for 18 years.

“I filed a complaint against this doctor with the CPSO [College of Physicians and Surgeons of Ontario] and they found him not guilty.”

A YouTube video of a virtual media briefing on Oct. 6, 2021, posted by the Simcoe Muskoka District Health Unit, showed its medical officer of health, Dr. Charles Gardner, responding to a reporter’s question on the issue by saying that he was “made aware of a youth who passed away suddenly.”

“This individual has received a dose of vaccination more than a month before passing away, and there was nothing in the history or medical record to suggest an adverse reaction of significance or myocarditis despite what may be portrayed on social media,” Gardner said.

“An autopsy has been performed and there’s nothing in the investigation to date to suggest that there was a causal association between that person having received immunization and his unfortunate passing.”

Gardner added that there was “no hospital admission” record, which Hartman refuted.

“My SON DID go to the hospital after his vaccine. I would call that an adverse reaction? Wouldn’t you? What is going on here?” he wrote on Twitter.

In his interview with NTD, Hartman criticized Gardner’s version of the story.

“He made it seem like it had nothing to do with the vaccine long before the autopsy was even completed. Why would he say that? They don’t want us to be suspicious, but then they do things that are very suspicious,” he said.

“In my mind and in my soul, the vaccine killed my son. There’s no other logical explanation. There’s a lot of things that said it did and none that say it didn’t.”

On Jan. 17 this year, Hartman testified before the Toronto Board of Health during a virtual COVID-related hearing where he spoke about Sean’s death and questioned the safety of COVID vaccines. Despite being invited to speak at the meeting, which was open to the public, most of Hartman’s testimony was deleted when the video was posted.

In an unredacted version uploaded on Rumble by StopCensorshipCanada on Jan. 19, Hartman can be heard telling the board that “the only thing” Sean’s autopsy report found “was a slightly enlarged heart.”

“I’m just wondering, really, how safe [the vaccine] is and why no deaths are being reported? You’re talking about numbers and ICUs, but nobody ever talks about deaths. It is happening more than anyone knows, and it’s just being denied and silenced?” Hartman said.

He also told the board about the contradictions in assessment between the coroner and the second opinion he sought from the pathologist.

“I don’t know who I can believe anymore. I have to go through the rest of my life by this thinking—there’s no cause of death, or it was the vaccine. I just don’t think vaccines for kids to play sports is the right thing to do,” he said.

According to a Jan. 27 article by RAIR Foundation USA, a grassroots activist organization dedicated to defending liberty, board secretary Julie Lavertu issued a statement claiming the reason Hartman’s testimony was deleted was because he “disclosed the personal health information of a minor without authorization.”

“Telling me I cannot talk about my son is the most insane thing I’ve ever heard in my life,” Hartman told NTD. “Who else has permission to talk to him other than his parents?”

Hartman has considered legal action but said he’s been unable to find a lawyer willing to take on the case.

Hartman said he will continue to seek answers. “They’re not gonna stop me. I’m gonna keep talking about [Sean] as long as I want—till my heart stops,” he said. “I need the truth, and I think someone knows the truth—and they just won’t admit it.”

“That boy was everything to me,” he adds. “He was so special, he was such a good kid. I never heard him swear once in 17 years. He loved animals, he loved people. He was a good kid and he didn’t deserve this.”

A GiveSendGo fundraiser has been created in memory of Sean and to enable Hartman to have “some time away [from work] to grieve, without the worry of finances.”