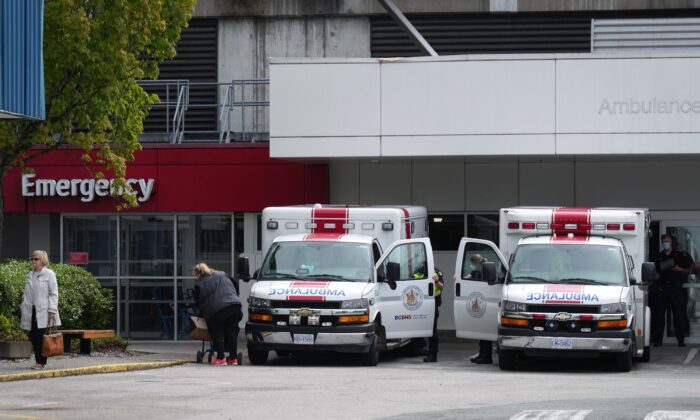 Paramedics and ambulances are seen outside the emergency department at Burnaby Hospital in Burnaby, B.C., May 30, 2022. (The Canadian Press/Darryl Dyck)
Canada

British Columbia’s emergency health service says it is reviewing thecircumstances of the reported death of an infant last week whilewaiting for an ambulance in a small community in the southernInterior, calling it a “heartbreaking loss.”

A statement from BC Emergency Health Services says in response to questions about the death in Barriere that it received a call to respond to a patient at a home in the community north of Kamloops on Thursday.

It says the closest available ambulance was immediately dispatched, and local firefighters were also requested to assist with the call.

The agency has not confirmed the patient’s age or cause of death, but says it has opened a review into the call for service and will work with the patient care quality office to reach out to the family and address any questions or concerns.

Troy Clifford, president of Ambulance Paramedics of B.C., had spoken to media over the weekend about the death of an infant, but said Monday that all requests for details about response times are being referred to Emergency Health Services.

He says in a statement it’s “heartbreaking to hear reports that anambulance and paramedics were not immediately available insomeone’s time of need.”

Clifford said his organization would continue to address a“provincewide staffing crisis,” including in communities like Barrierethat he said are “often left without appropriate ambulance coverage for long periods of time due to staffing issues.”

“This is easily one of the worst situations anyone can imagine,” he said.

BC Emergency Health Services said its “deepest condolences go out to the family and the community.”