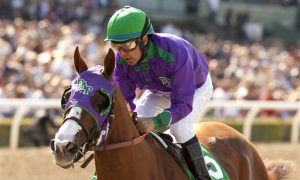 A wake is scheduled Thursday afternoon for his 74-year-old mother, killed when a flash flood destroyed her trailer three days ago and swept her away. But his son, who tried to save her, remains missing.

“What do I do?” Kevin Johnson pleaded. “Do I go down there or do I stay here? Mom would want me to stay here.”

Scott Johnson, a 34-year-old musician, was last seen Monday, wading through rushing floodwater with his grandmother on his back.

The flood killed at least three. Police continue to check on others whose families fear they might be lost or stranded.

You talk to them and they say, ‘Right there is where my house used to be.’
— Randall Mulkey

Johnson is now the only victim still listed as missing.

“I’m praying for a miracle, that we find him alive,” Kevin Johnson said, inconsolable as he overlooked the creek that swallowed his son. “We have to find him. I can’t go on like this. The Lord is going to let us find him.”

The flooded creek’s violent current hampered rescue efforts for three days. But it receded overnight, and the Johnson family hauled a jon boat into the water Thursday to search for themselves.

Dozens of other crews continue to comb the devastated area, which stretches more than 8 miles from the town of Flat Gap south to Staffordsville. For two days, police officers, deputies, firefighters, state troopers, National Guardsman and volunteers have trudged door-to-door across this rugged Appalachian terrain about 120 miles east of Lexington, painting orange x’s on each structure they search.

They’ve battled swarming mosquitoes and snake-infested creeks, piles of rubble 10 feet tall and mud so thick it sucks the shoes off their feet.

Hope is fading for the families who watch them work.

“You talk to them and they say, ‘Right there is where my house used to be,'” said Randall Mulkey, a firefighter from a nearby county who volunteered to help search.

He’s seen homes splintered into rubble, others split in half and cars strewn in unlikely places. Tromping through the mud is exhausting, he said. It breaks his heart to see people’s belongings — clothes, toys, photographs — among the wreckage and know they lost everything they had.

Scott Johnson had already guided his father, uncle and sister from the raging flood that inundated their cluster of trailers. He turned back one last time to save his grandmother, whom he called Nana, and a 13-year-old family friend.

“We told him, ‘You can’t make it,'” his father recalled. “He said, ‘I’m going to get her out of that trailer.” Johnson saw his son hoist his Nana onto his back, only to be swept away.

He always said he would die trying to protect his family, and that’s exactly what he did.
— Amy Akers

Her brother had been a musician. He went by the stage name Scott Free, started his own hip hop record label and released an album in 2013 called “Welcome to Hollerwood.” On his website he said he tried in his music to capture the Appalachian spirit and the struggle to survive amid the grinding poverty and drug addiction that has long tormented his native state.

Retired truck driver Herman Eddie May Sr., 56, was also killed. His daughter, Amy Akers, said they lived next door to each other. When the water started rising, he got in his car to search for a safe escape route. He reached the top of the hill and turned back to retrieve his daughter and two grandchildren. A neighbor begged him to stay on dry land but he refused, Akers said.

“He always said he would die trying to protect his family, and that’s exactly what he did,” she said.

The car stalled in the rising water and May got out. A neighbor threw him a rope, but a floating truck plowed into the car, he lost his grip and the water carried him away, Akers said. Neighbors pulled him from the water, but it was too late.

The body of a third victim, 22-year-old Richard Blair, was found Wednesday afternoon, the coroner said.

The arduous search, destruction and death wore on rescuers.

After a crew found a car upside down and partially submerged in the creek, Flatwoods Police Officer Justin Stevens stood on top of it as they called for the jaws of life to tear it open and see if anyone had perished inside. But the car’s owner arrived just in time, and told the crew it had floated there, unoccupied, from her home a mile away.

“Thanks for not being in it,” said Stevens said. “We really didn’t want to see that.”

As families returned to search the ruins of their homes, church groups and others passed out food and neighbors banded together to clear heavy debris. Police said they hoped there still might be some happy endings.

Johnson County Deputy Sheriff Terry Tussey spotted a Chihuahua, alone and trembling, pacing on near a pile of debris on the other side of a creek.

“She was dancing like she wanted to come across the creek but couldn’t do it,” he recalled. He trudged through the muck to find a safe crossing, then coaxed the little dog to him and cradled it back to his car. He drove around the afternoon with the tan dog in his lap, looking for its owner.

Robin Cisco sifted through the remnants of her daughter’s trailer, digging her grandson’s clothes and toys from the mud and rubble. The family barely got away: Her daughter ran from the trailer with her 18-month-old son as the storm hit and water started rising.

“They got out and they’re OK, that’s all we were worried about,” Cisco said. “All this other stuff can be replaced.”