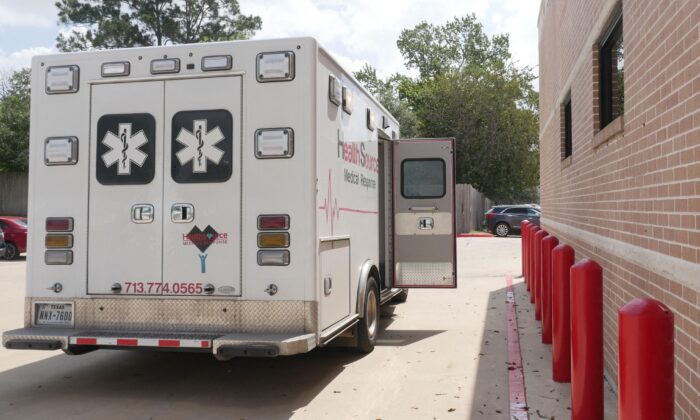 An ambulance outside the Bellville Medical Center after dropping off a patient, in Bellville, Texas, on Sept. 1, 2021. (Francois Picard/AFP via Getty Images)
By Petr Svab

Diseases of the heart and veins claimed more lives over the past several years among American aged 25 to 44 than before the COVID-19 pandemic. Even with the pandemic waning, such deaths remain elevated.

In 2020, the first year of the pandemic, deaths caused by circulatory diseases increased by about 15 percent in the 25 to 44 age group compared to the year before, according to death certificate data collected by the Centers for Disease Control and Prevention (CDC).

It appears that the increase may have been caused by multiple factors.

COVID-19 sometimes causes complications in the circulatory system. It’s likely that some deaths, especially early on in the pandemic, were caused by COVID-19 but were misclassified on the death certificate.

Also, many people were likely diagnosed too late or not at all because they were afraid to go to a doctor during the pandemic.

However, diseases of the circulatory system continued to claim lives at a higher rate in this age group even in 2022, when the pandemic receded. In the first half of the year, such deaths were still more than 13 percent above the death toll for the first half of 2019, according to the CDC’s preliminary data.

In the 45 to 54 age group, such deaths increased in 2020–21 but seem to have since receded back to pre-pandemic levels.

In the 15 to 24 age group, such deaths have barely budged over the past five years.

A growing number of experts and studies have associated the COVID-19 vaccines with serious, even fatal conditions, including heart inflammation, or myocarditis. They suggest that the spike protein produced through the vaccination can cause blood clotting and inflammation.

“All cardiovascular conditions have gotten worse because of the vaccine and anything and everything that can go wrong with the heart has gone wrong with the heart as a result of these mRNA vaccines. There’s no doubt about it,” said Dr. Aseem Malhotra, a British cardiologist who has researched extensively the associations between the COVID-19 vaccines and heart issues.

Malhotra has argued that such issues should be presumed to be associated with the vaccines until proven otherwise. He initially supported the vaccines but changed his mind after his father’s cardiac arrest six months after vaccination.

“When people are in a study or it’s in a post-marketing period in a brand-new drug, when someone dies within a few days, or certainly within 30 days of any new drug or injection, it is that drug until proven otherwise,” he told Epoch TV’s Jan Jekielek last month.

“If this was in a regulatory dossier, it could even be something that’s seemingly disconnected. Believe it or not, in clinical trials, if someone’s taking a drug and they have a car accident, it’s attributed to the drug, because the drug may have made them dizzy or foggy or what have you.”

The rollout of the vaccines also correlates with significant increases in other conditions, including eye problems, immune system issues, and, in some data, cancer, according to Josh Stirling, an insurance research analyst.

Overall, the vaccination correlates with increased mortality, according to Stirling.

“The more doses on average you have in a region within the United States, the bigger increase in mortality that region has had in 2022 when compared to 2021,” he recently told Jekielek in an interview for “American Thought Leaders.”

Stirling has argued that if the vaccine’s adverse effects are properly identified, they could be mitigated.

“If we were actually just screening for these people, the vast majority of these health issues, before they become catastrophic, could very easily be managed—not necessarily solved, but certainly managed with amazing medical advances and simple things like blood thinners, or changes in lifestyle,” he said.

Mortality in prime-age adults aged 18 to 64 substantially increased in 2020 and onward, even with COVID-19 deaths excluded, according to a Dec. 15, 2022, paper that attempted to account for COVID-19 deaths misclassified on death certificates.

Rather than the vaccines, the paper blamed the lockdown policies instituted to counter the pandemic for exacerbating existing public health issues.

“It was very much malpractice.”