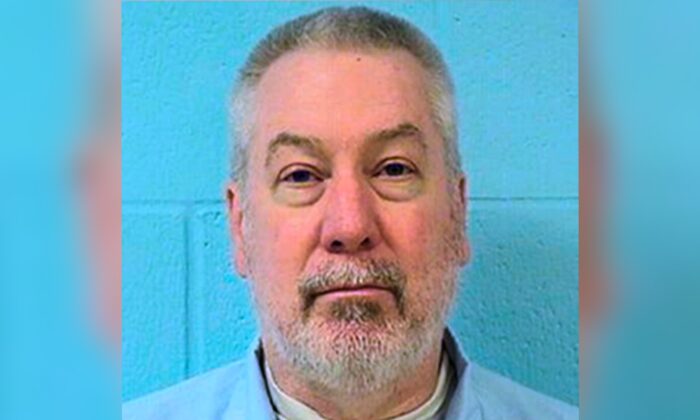 JOLIET, Ill.—A judge on Monday delayed for three months a hearing on former suburban Chicago police officer Drew Peterson’s request to toss out his murder conviction in the killing of his third wife after his attorney said he needed more time.

Will County Judge Edward Burmila set the next hearing date for May 18.

During a brief hearing, Assistant Public Defender Jason Strzelcki told the judge he needed time to interview witnesses, several of whom live outside Illinois. He also said he planned to amend the petition that Peterson filed himself last year.

“We will be adding several claims,” said Strzelcki, who did not detail what those might be.

The judge’s decision keeps alive Peterson’s legal effort to vacate his 2012 conviction of first-degree murder in the 2004 slaying of Kathleen Savio. He was sentenced to 38 years in prison.

Savio’s body was found in a dry bathtub in her home. Her death was originally ruled accidental, but after Peterson’s fourth wife, Stacy Peterson, disappeared in 2007, authorities reopened the investigation. Her body was exhumed and after a second autopsy, her death was classified as a homicide, and Peterson was arrested.

Peterson is also a suspect in the disappearance of Stacy Peterson, who is presumed dead. Drew Peterson has not been charged for her disappearance.

Peterson, who was a police sergeant in Bolingbrook, has maintained his innocence.

In his handwritten petition, he argued that he was provided ineffective counsel by his lead attorney, Joel Brodsky. He also alleged that Will County State’s Attorney James Glasgow intimidated witnesses, a contention Glasgow has denied.

Peterson also argued that Burmila should not have allowed a pastor and a divorce attorney to provide hearsay evidence when they testified that Stacy Peterson talked to them about Savio’s death and her concerns about her safety.

Peterson remains in prison and did not attend Monday’s hearing. His attorney, whom Burmila appointed to represent him, said he didn’t believe that Peterson would attend the May 18 hearing either.

The judge could decide then that there is enough information to go forward, a decision that could lead to a hearing in which Brodsky, Glasgow, and others could be called to testify.

In 2016, he was sentenced to an additional 40 years in prison for trying to hire someone to kill Glasgow.