Health Officials Warn Against Jumping to Conclusions on Omicron Variant 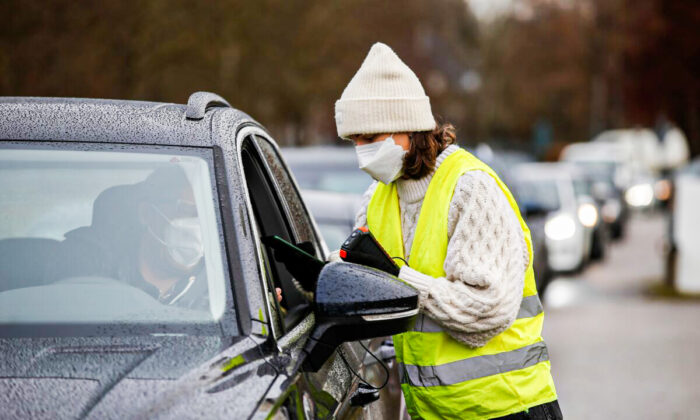 A woman takes the digital data of a man at a drive through rapid coronavirus disease (COVID-19) test centre amid the COVID-19 pandemic in Furstenfeldbruck, Germany, on Nov. 27, 2021. (Michaela Rehle/Reuters)
By Jack Phillips

Dr. Francis Collins, director of the National Institutes of Health in the United States, said there is no data yet that suggests the new Omicron CCP (Chinese Communist Party) virus variant causes more serious illness than previous variants.

“I do think [Omicron is] more contagious, when you look at how rapidly it spread through multiple districts in South Africa,” Collins, who previously suggested that a high-security lab in China may have received NIH funding to perform gain-of-function research on viruses, told CNN’s “State of the Union” on Sunday.

The United States is slated to impose a travel ban on eight southern African nations starting Nov. 29, while the European Union, Israel, the United Kingdom, and many other countries have done the same due to the spread of the variant—which was discovered in South Africa and Botswana.

A top doctor with the South African Medical Association, who helped alert authorities to the new CCP virus variant, told media outlets that Omicron has unusual but mild symptoms.

“Their symptoms were so different and so mild from those I had treated before,” Dr. Angelique Coetzee told The Telegraph.

“It presents mild disease with symptoms being sore muscles and tiredness for a day or two not feeling well,” Coetzee explained. “So far, we have detected that those infected do not suffer the loss of taste or smell. They might have a slight cough. There are no prominent symptoms. Of those infected some are currently being treated at home.”

“Travel restrictions may play a role in slightly reducing the spread of COVID-19 but place a heavy burden on lives and livelihoods,” Moeti said in a statement. “If restrictions are implemented, they should not be unnecessarily invasive or intrusive, and should be scientifically based, according to the International Health Regulations, which is a legally binding instrument of international law recognized by over 190 nations.”

Earlier this weekend, WHO received questions about why it skipped over naming the new variant “Xi,” after the Greek alphabet letter, instead opting to name it Omicron. Critics speculated that the U.N. health agency, which has been accused before of colluding with the Chinese regime, of trying to placate the CCP and its leader, Xi Jinping, with the move.

But Moeti said that South Africa and Botswana acted with alacrity in finding the new variant, which the WHO on Friday said had a number of mutations and could be more infectious. It’s not clear if Omicron can lead to more severe illness or whether it can breach vaccines or natural immunity.

“The speed and transparency of the South African and Botswana governments in informing the world of the new variant is to be commended,” Moeti stated. “WHO stands with African countries which had the courage to boldly share life-saving public health information, helping protect the world against the spread of COVID-19.”

Former Food and Drug Administration Commissioner Scott Gottlieb, who now sits on Pfizer’s board of directors, argued that vaccine developers have “a pretty good degree of confidence” that vaccinated people who received the booster dose can deal with Omicron.

If you talk to people in vaccine circles, people who are working on a vaccine, they have a pretty good degree of confidence that a boosted vaccine—so three full doses of vaccine—is going to be fairly protective against this new variant,” Gottlieb told CBS News on Sunday.