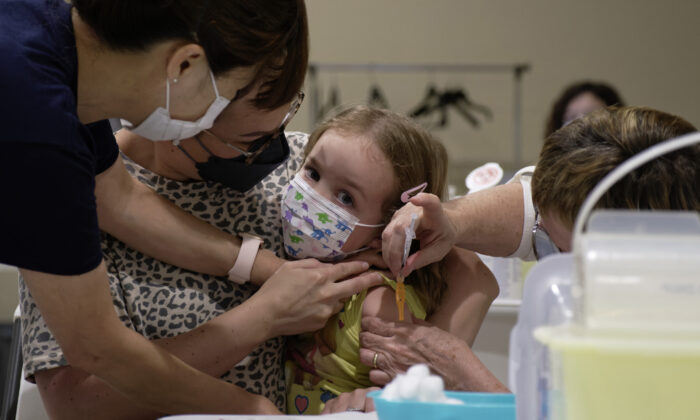 Khloe Robins, 3, gets a COVID-19 vaccination shot at a clinic in the Victoria Square Mall in Regina on July 22, 2022. (Michael Bell/The Canadian Press)
Canada

Health Canada approved on Sept. 9 the use of Pfizer’s COVID-19 vaccine in children aged 6 months to less than 5 years old, making it the second vaccine approved for the youngest cohorts of children in Canada.

To approve a vaccine, Health Canada said it has to complete an independent drug review process and ensure that “the benefits must also outweigh any risks.”

“After a thorough and independent scientific review of the evidence, Health Canada has determined that the benefits of this vaccine for children between 6 months and 5 years of age outweigh the potential risks,” the statement reads.

“Health Canada has placed terms and conditions on the authorization requiring Moderna to continue providing information to Health Canada on the safety and efficacy of the vaccine in this younger age group.”

In mid-June, U.S. public health officials authorized and recommended the Pfizer and Moderna vaccines for all children aged 6 months to 5 years, allowing the roughly 19.5 million children to begin receiving the vaccines on June 20.

However, uptake of the vaccine among children peaked in just a little over two weeks on July 1, according to an analysis of the U.S. Centers for Disease Control and Prevention (CDC) data by the Kaiser Family Foundation.

“As of July 20, approximately 544,000 children under the age of 5 had received at least one COVID-19 vaccine dose. This represents 2.8 percent of the approximately 19 million children in this age group,” the study said.

In Canada, there were close to 1.9 million children aged 4 and younger, according to 2021 data from Statistics Canada.

Earlier this month, Health Canada also approved a new COVID-19 vaccine from Moderna that targets both the original strain of the novel coronavirus and the Omicron variant. Ottawa has already purchased 12 million doses of Moderna’s Omicron vaccine, and some existing orders for the original Moderna vaccine will be converted so that the newly adapted version will be delivered instead.

Isaac Teo, Zachary Stieber, and The Canadian Press contributed to this report.