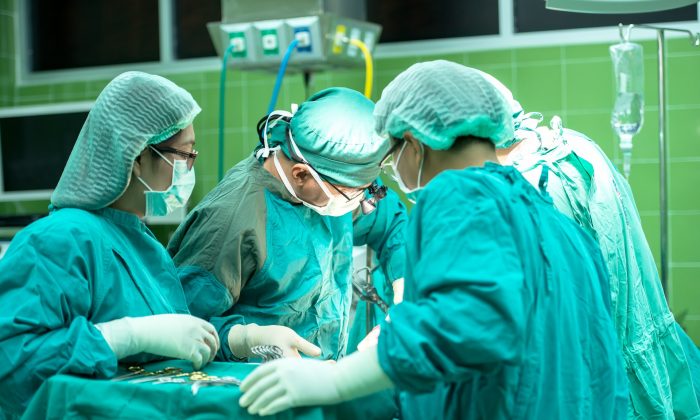 Controversial research only taking place in China
By Simon Veazey

The announcement of the first head transplant has met with skepticism from scientists and stoked fears of Frankenstein’s monster.

But two pressing questions are being overlooked, say experts: Where are the bodies for this research coming from? And why is “head transplant” research happening only in China, where the bodies of death row prisoners are known to have been used for transplant without consent.

Italian researcher Sergio Canavero announced that he had carried out the first successful head transplant on Nov. 11, albeit between two corpses. The details of that research were published on Nov. 22.

Canavero, who likens himself to Victor Frankenstein, says the experiment is the precursor to the next stage of transplanting between brain-dead subjects. The step after is a full head transplant for a living person.

After Canavero’s research was rejected on ethical grounds in the United States and Europe, it found a home in China with a collaborator, Xiaoping Ren.

“The Americans did not understand,” Canavero told a press conference on Nov. 11.

Professor Karen Rommelfanger is senior editor of the American Journal of Bioethics Neuroscience. She said that given China’s history of using executed prisoners for transplants there are questions that need urgent answering.

“What’s very important—that no one has spoken about—is where the bodies are coming from, and who consents.”

“There’s been no response from any of the Chinese collaborators about a very fundamental piece of this whole enterprise—which is consenting individuals to participate.”

She said she is surprised that people have been distracted by the other issues and missed what she sees as the most important issue.

“Everybody has seen the pageantry around the head transplant, and we’ve seen a couple of responses. One is to attack Sergio Canavero himself and just to say what a wacky character he is.  The other is to say that this is gross and hard to stomach and to think that this will just go away if we stop looking at it.”

Rommelfanger said that there has been no transparency.

“Head transplant” is perhaps more usefully understood as a body transplant—the aim being that when the health of someone’s body fails, they can simply swap it for a healthier, perhaps younger one.

The current edition of the American Journal of Bioethics Neuroscience is dedicated to the issues around of head transplants, stirred up by Canavero and Ren’s research.

Rommelfanger’s concerns are explained in an editorial article in the journal, co-authored with Paul Boshears, Professor of Philosophy at Kennesaw State University.

Canavero said he has carried out the procedure twice, which would require four bodies.

The use of the bodies of political prisoners for transplants in China has been well-documented. For decades, China openly admitted to using organs of executed prisoners without consent.

In 2006, investigations revealed that China had a thriving industry harvesting of organs from prisoners of conscience—killed on demand so their organs could be sold for profit.

The report Bloody Harvest/The Slaughter: An Update, published in June 2016, said the main targets of organ harvesting are those who practice the spiritual discipline of Falun Gong. Uyghurs, Tibetans, and House Christians have also been killed in order to obtain organs for transplants, sometimes sold to foreigners, the report said.

The investigators estimate that up to 1.5 million organ transplants may have taken place in China since 2000, without any verifiable source for the organs. Transplants cost $60,000 for a Kidney, $100,000 for a liver, and up to $150,000 for lung and heart transplants, according to official Chinese sources, cited in the report. The industry is worth over $1 billion a year, according to Leon Lee, the maker of the award-winning documentary film, Human Harvest.

Research Carries On Despite Objections

The prospect of a head transplant has been raised by Canavero since 2015. Initially, he had a living subject lined up for the first live surgery, who later withdrew.

On Nov. 11., he made an announcement in Vienna that he had successfully accomplished the first ever head swap between cadavers.

“Everyone said it was impossible, but the surgery was successful,” Canavero told a press conference in Vienna, which was filmed and posted to YouTube.

“A full head swap between brain-dead organ donors is the next stage,” he said.

“And that is the final step for the formal head transplant for a medical condition which is imminent.”

Many in the medical community say the fundamental premise is unethical. Others reject Canavero’s claims, saying it simply isn’t possible.

Dean Burnett, a neuroscientist and psychiatry lecturer at the Center for Medical Education at Cardiff University, said what Canavero wants to do is impossible.

“To be able to say you can just stick someone else’s head on someone else’s body is not really feasible based on current medical understanding,” said Burnett, reported National Post. “I’d be very keen to hear his explanation about how we’ve got around these issues,” he said.

Professor Jan Schnupp, from the University of Oxford, described the proposals as “disturbing.”

“The chances that a person who has their head transplanted onto another body will be able to gain any control over, or benefit from, that grafted body are completely negligible,” Schnupp told The Sun.

Just because news of the research fades away it won’t mean that the experiments have stopped, or the questions have gone away, said Rommelfanger.

“I think we won’t hear about this again until they have something positive or a positive spin to report. There will be a lot of failures before we hear anything.”

Rommelfanger said that despite its shortcomings and the stomach-churning potential, this project is acting as a gruesome PR platform for China to ply its no-holds-barred research.

“This is China saying: If you want to do gene editing or make other edgy, perhaps controversial, technological advancement, we’ve got the resources.”

If you feel this topic is important, please consider sharing this article. Thank you!