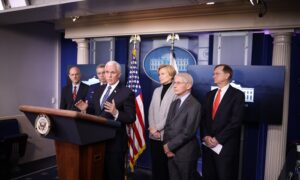 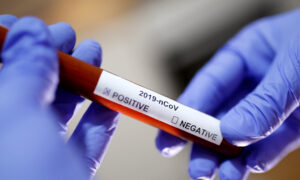 Labs in All 50 States Testing for New Coronavirus
0 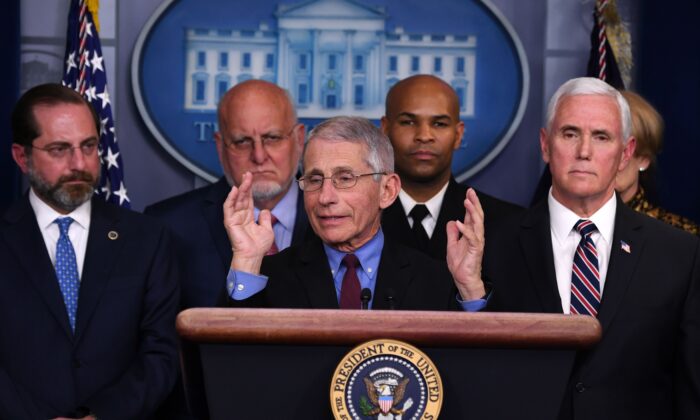 Director of the National Institute of Allergy and Infectious Diseases at the National Institutes of Health Dr. Anthony Fauci speaks about the COVID-19 (coronavirus) alongside Vice President Mike Pence and members of the Coronavirus Task Force in the Brady Press Briefing Room at the White House in Washington on March 9, 2020. (Saul Loeb/AFP via Getty Images)
AMERICA

Dr. Anthony Fauci, director of the National Institute of Allergy and Infectious Diseases, said on “Fox & Friends” that those with underlying health conditions, especially among the elderly, should “right now” stop all travel plans and also distancing themselves from social gatherings amid the outbreak of the novel coronavirus.

The novel virus SARS-CoV-2, which causes the disease COVID-19, has killed thousands worldwide, with experts estimating a mortality rate of between 0.1 and 1 percent.

“If you look at the people who wind up getting into serious difficulty and even dying, that’s very heavily weighted toward individuals with underlying conditions, particularly the elderly,” Fauci told the morning news show on Monday.

“That’s the reason why we have been saying lately how important it is to protect those vulnerable people by making sure no matter where they are right now, not a month from now, but right now, the people with the underlying conditions need to distance themselves from crowds, not travel, not get on long air flights and certainly not get on a cruise ship,” he added.

He said that generally, he would define elderly as 65 years old or above, but “it’s a really wide range.”

Fauci also praised the coronavirus task force that has been working around the clock to monitor and combat the outbreak. “They could not be working any harder,” he said. President Donald Trump announced the task force on Jan. 29.

Last week, Fauci joined other government officials to advise precautions, such as stopping travel and practicing social distancing for those more likely to become severely ill from COVID-19.

The group of people most likely to get serious cases of COVID-19 are those with underlying health issues, especially those who are older, Fauci said at the time. He also urged people to think about “not putting yourself in a situation, whatever that might be, that might increase the risk, given your situation.”

Now, he is doubling down on his message, saying that it’s not longer just advice, but that people should be acting on the message immediately.

Correction: A previous version of this article incorrectly stated that Dr. Anthony Fauci is the head of the National Institutes of Health. The Epoch Times regrets this error.