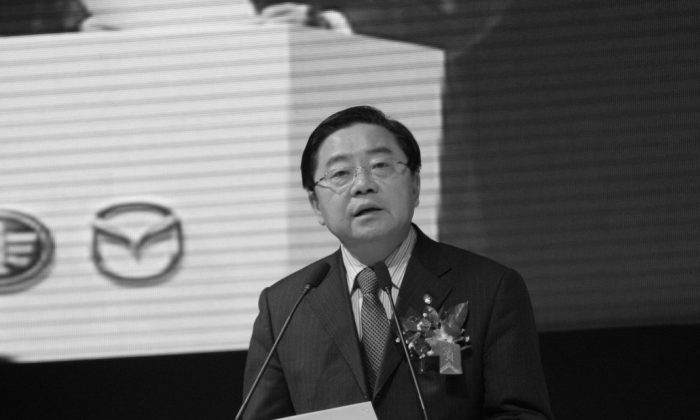 A screenshot from auto.sina.com.cn shows the chairman of China’s FAW Group Corporation, Xu Jianyi. Xu was put under investigation for corruption on March 15, 2015, according to anti-graft investigators. (Epoch Times)
China

Head of China’s Automotive Giant, FAW, Under Investigation for Corruption

The chairman of the board and communist party secretary of China’s state-owned automobile manufacturer FAW Group Corporation, Xu Jianyi, was put under investigation for “severe violations of discipline and of the law,” by the Chinese regime’s central anti-graft watchdog on March 15.

FAW (First Automotive Works) is a Chinese equivalent to Ford—it employs about 132,000 people.

The announcement was published on the website of the Central Commission for Discipline Inspection just hours after the closing of the political session of the regime’s National People’s Congress in Beijing.

Anti-graft agents published results of their investigation into FAW—calling it a “rectification and reform notice”—on Jan. 30. The report stated that some officials and executive managers of FAW directly own or have shares in branch stores, against company rules, and abuse power for personal gain. Executives embezzled over 23 million yuan ($3.7 million) of public funds to buy land and build 131 luxury villas, the report says.

Since investigators began their work in July of last year, a number of top FAW executives have been sacked, while others were promised leniency if they revealed the misdeeds of their peers, according to state news media. At least 24 staff, including eight high-level managers, have been let go, reports say.

Xi Jinping’s anti-corruption campaign has made no bones about going after former associates of Jiang, though whether the move against FAW is part of this process is unclear. The FAW Group is suspected of being where Jiang reaped his first fortune, having served in the company from 1956 to 1962, rising through the ranks to Party Secretary of a factory. After he left the company and became Party leader nearly three decades later, he promoted a number of executives there into top government positions. And every time he visited the headquarters, he would boast that it was his first Party job.