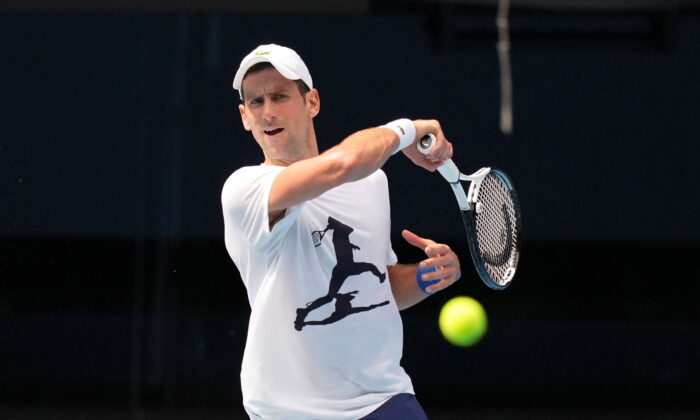 Novak Djokovic’s mother has defended her son on Australian national television and called on the Australian government to not deport the tennis player.

Dijana Djokovic appeared on Channel 7’s Sunrise on Wednesday and begged for Australian authorities to allow her son to stay and play in the Australian Open.

Questions around the timing of Djokovic most recent COVID-19 infection surfaced after documents from the court hearing on Jan. 10 showed that Djokovic performed a test on Dec. 16 and received a positive test result on the exact same day at 8 p.m. in the evening.

However, photos have shown the tennis player was at a children’s award ceremony on Dec. 17 as well as being present for an interview and photo shoot on Dec. 18 for L’Equipe.

When asked about the photos, Dijana said that the player did not know at the time.

According to Serbian laws, after receiving a positive COVID-19 test, one would need to self-isolate for 14 days or until one tests negative via a PCR test during that period.

Serbia’s Prime Minister Ana Brnabic told the BBC on Jan. 12 that “if you’re positive you have to be in isolation.”

The plea from Djokovic’s family came just hours prior to Novak releasing a statement over the situation on Instagram to address the queries around his recent COVID-19 infection saying that he did not receive the diagnosis until Dec. 17 after attending the award ceremony. Although court documents showed that he was tested and diagnosed on the same day.

Djokovic said that he contracted COVID-19 from a basketball game in Belgrade on Dec. 14, but had no symptoms present. He then took a rapid antigen test on Dec. 16 which came back negative and then “out of an abundance of caution,” he took the approved PCR test the same day.

In Serbia, only those that have tested negative but have COVID-19 symptoms are asked to self-isolate but as Djokovic was asymptomatic, he was not required to isolate during the waiting period.

In regards to the interview and photoshoot he attended on Dec. 18, during which he was supposed to self-isolate, Djokovic reasoned that he cancelled all other events but the interview as he “felt obliged to go ahead.”

“I didn’t want to let the journalist down, but did ensure I socially distanced and wore a mask except when my photograph was taken,” he said.

His statements are supported by information from the article that he wore a face mask during an interview but removed it for the photoshoot.

Court documents from the federal hearing showed that he received a negative COVID-19 test on Dec. 22 which would effectively end his self-isolation period and a photo was posted of him in the streets of Belgrade on Dec. 25.

Djokovic also addressed the travel declaration he submitted prior to entry. On the document, it was ticked that he did not travel to another country within the previous 14 days of arrival to Australia despite having the photo and video footage of him practising in Spain.

He said that the issue of his travel declaration was submitted by his support team on his behalf.

“My agent sincerely apologises for the administrative mistake in ticking the incorrect box about my previous travel before coming to Australia.”

The Djokovic saga has escalated to a diplomatic issue between Serbia and Australia with the prime ministers of the two countries exchanging phone calls on Jan. 11.

In a readout released to News.com, it read that Morrison explained the border’s non-discriminatory policy and its role in protecting Australia during the COVID-19 pandemic.

Both parties “agreed to stay in contact on the issue, and to further strengthening of the bilateral relationship.”

The immigration minister Alex Hawke is still considering whether to execute his power to deport Djokovic.