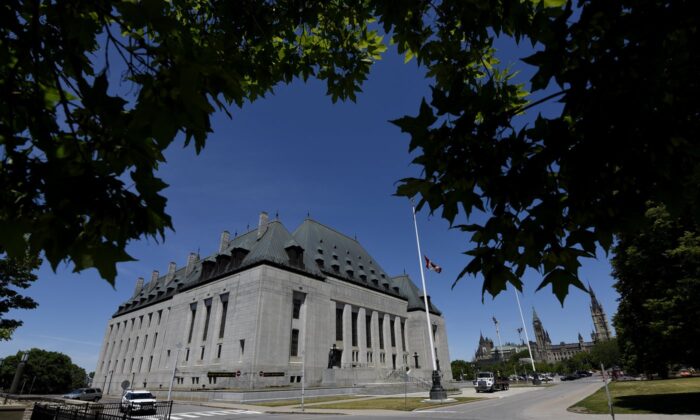 The Supreme Court of Canada is seen in Ottawa on June 17, 2021. (The Canadian Press/Justin Tang)
Canada

‘He Did Nothing’: Top Court Releases Reasons for Restoring Foster Dad’s Conviction

The Supreme Court of Canada has released written reasons for its decision to uphold the conviction of a foster father in the starvation death of one child and the near death of her sister.

Both were in the care of Kevin Goforth and his wife.

The high court restored Goforth’s 2016 convictions of manslaughter and negligence causing bodily harm after hearing arguments in December. His wife Tammy was convicted of second-degree murder and sentenced to life in prison with no parole eligibility for 17 years.

The girls were rushed to a Regina hospital in 2012 and found to be severely malnourished, dehydrated and covered with bruises. The four-year-old died of a brain injury following cardiac arrest. Her sister, who was two at the time, survived.

They had been in the Goforths’ care for nine months.

The Saskatchewan Court of Appeal had ordered a new trial for Kevin Goforth in early 2021. The court said the trial judge erred in her instructions to the jury because Tammy Goforth was the primary caregiver and her husband was in a secondary role.

But Justice Suzanne Cote, who wrote the judgment on behalf of the Supreme Court, said Goforth would have been aware of what was happening.

“Given the evidence of emaciation and neglect of the children, the accused’s alleged reliance on his wife, his alleged limited interaction with the girls, and the girls’ alleged history of being picky eaters and suffering from illness regularly were not circumstances material to the jury’s consideration of whether the accused had the requisite foresight to be criminally liable,” Cote wrote in the reasons released Friday.

“The accused was well-positioned to observe the children’s condition, yet he did nothing.”

Cote said that while the trial judge’s charge to the jury was “not perfect,” it was sufficient to let jurors make an informed decision.

“Jurors do not check their common sense at the door of the deliberation room. Given the evidence and the circumstances of the trial as a whole, I am confident that the jury in this case was well equipped to make a common sense assessment,” she wrote.

“I am persuaded of the Crown’s submission that no substantial wrong or miscarriage of justice flowed from the deficient instructions.”

Cote wrote that the trial judge had also made it clear to the jury that Goforth, who worked as a carpenter in Regina that required him to work six days a week for 10 to 12 hours a day, was largely the breadwinner in the family.

She noted that Goforth’s lawyer not initially raising any concerns about the instructions to jurors undermines the argument that they may have been “misled or confused”.

“It belies the argument that the trial judge’s decision not to repeat evidence in an already lengthy jury charge constituted an error.”

Goforth’s case will go back to the Saskatchewan Court of Appeal to consider a bid to reduce his sentence.