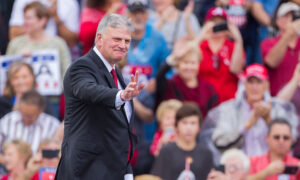 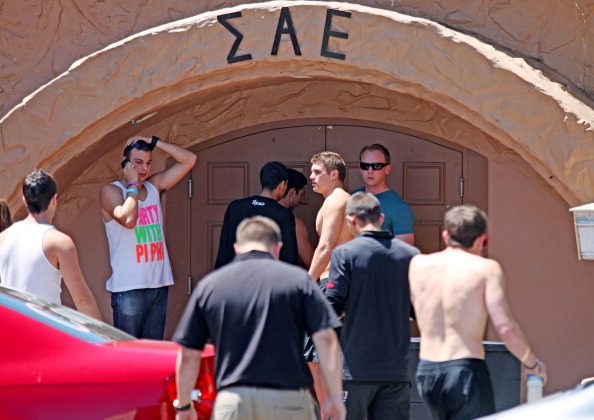 Students outside of the Sigma Alpha Epsilon Fraternity near San Diego State University on April 20, 2012. (Sandy Huffaker/Getty Images)
US

An incident at the University of Oklahoma’s Sigma Alpha Epsilon fraternity has drawn nationwide condemnation. Here’s what we know so far:

Fraternity members with SAE were recorded on a bus chanting a racist slogan, which was leaked anonymously to the school’s newspaper before it found its way in media outlets across the U.S.

“There will never be a n—- SAE. You can hang him from a tree, but he can never sign with me,” the chant says.

According to CNN, student newspaper The Oklahoma Daily received the video via e-mail on Sunday. The fraternity was celebrating its Founder’s Day on Saturday, which is when the video was captured.

“We decided that this was definitely a story they needed to cover without question,” Editor Katelyn Griffith told the broadcaster. “This was something that we knew wouldn’t be tolerated by the students at OU and the university at large.”

On Monday, following widespread condemnation against the fraternity, the school’s student newspaper reported that there was a Confederate flag hanging in a member’s room.

According to Oklahoma’s NewsOn6.com, the O’Colly student newspaper posted a photo showing a “visible confederate flag” hanging inside the building.

The Confederate flag, while not inherently a racist symbol, is considered controversial since it was adopted by southern states during the Civil War. It has been used by the Ku Klux Klan and other racist groups.

“A brother who lives in our house displayed the Confederate flag in his personal room,” Chris Bringaze, OSU SAE President, told the paper. “Sigma Alpha Epsilon does not endorse the Confederate flag nationally nor do we endorse it as a chapter. In addition, the flag has never been a symbol of our fraternity. My fellow chapter leaders and I have asked the brother to remove the flag from his room.”

3. What happens now for the students?

The University of Oklahoma cut its ties with SAE, and it told the fraternity’s members they have until midnight to get their belongings and get off campus.

On Sunday, the national SAE chapter shut down the chapter.

Says a statement from the national organization: “In addition, all of the members have been suspended (from the organization), and those members who are responsible for the incident may have their membership privileges revoked permanently.

“We apologize for the unacceptable and racist behavior of the individuals in the video, and we are disgusted that any member would act in such a way. Furthermore, we are embarrassed by this video and offer our empathy not only to anyone outside the organization who is offended but also to our brothers who come from a wide range of backgrounds, cultures and ethnicities.”

4. SAE has a history of hazing, bullying

In 2013, SAE leader Bradley M. Cohen wrote a letter to members saying that the fraternity “has been plagued with an increase in hazing over the past decade that has led to pledges ‘dying’ to be SAEs.”

“The media has labeled us as the ‘nation’s deadliest fraternity,'” he said. “Our insurance premiums have skyrocketed and, as a result, we are paying Lloyd’s of London the highest insurance rates in the Greek-letter world. Universities have been denying us the opportunity to colonize on their campus, and we have had to close 12 chapters over the past 18 months for hazing or hazing-related situations.”

In 2014, the fraternity banned nationwide pledging in an effort to stop hazing. At the time, the fraternity said, “This change will strengthen our Fraternity, create highly positive opportunities to redefine membership, attract prospective members who otherwise might not join and lead the way among Greek-letter organizations as we recommit ourselves to our Founding Fathers’ original concepts and return to their intent for membership in the Fraternity.”

The video can be seen below, but it contains profanity and might be disturbing to some:

Racism is alive at The University of Oklahoma. @President_Boren pic.twitter.com/eAvnPD8jxA