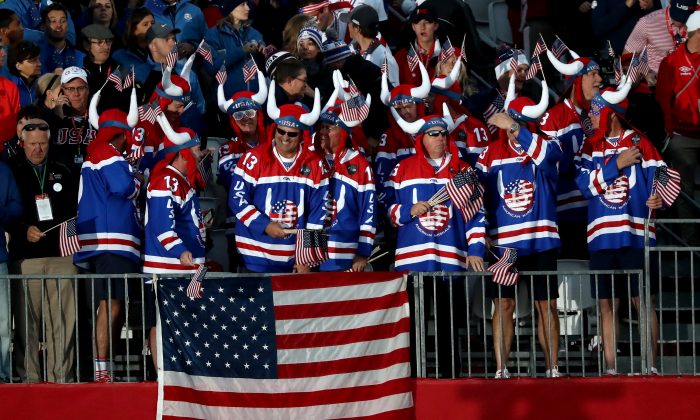 Fans of the United States prepare for tee off prior to the morning foursome matches of the 2016 Ryder Cup at Hazeltine National Golf Club in Chaska, Minnesota. (Sam Greenwood/Getty Images)
Golf

CHASKA, MN—With a crowd of 45,000 people on hand for the final practice round and opening ceremony on Thursday the 41st Ryder Cup Matches are set to start this morning. The rousing festivities have now set in motion what could be an epic contest.

The opening included the likes of former Ryder Cup Captains and competitors Jack Nicklaus and Tony Jacklin. There was a special tribute to Arnold Palmer who passed away last Sunday. The Captains on both sides — Davis Love III for Team USA and Darren Clarke for Team Europe — paid homage to one another and the unique qualities that set apart the Ryder Cup from all other golf events.

The 41st Matches have returned to America’s heartland for the 3rd time in the last four outings when hosted in America. Hazeltine National is no stranger to top tier competition having hosted two US Opens and PGA Championships in the last 46 years along with several other national championships of one type or the other. The course is indeed ready and interestingly the routing of the layout was changed to provide for even more corporate tents and grandstands.

The enthusiasm for the American side is palpable. Four years ago at Medinah, outside of Chicago, the USA had a 10-6 lead going into the pivotal 12 singles matches. The Americans collapsed and Europe matched the greatest comeback in Ryder Cup history.

Team Europe has won 8 of the last 10 Ryder Cups and the last three in succession. The American squad is in desperate need to turn things around and have the Ryder Cup remain on the USA side of the pond. After the ’14 loss in Scotland there was fingerpointing from star players such as Phil Mickelson and the PGA of America opted to create a “task force” in re-examining the manner in which the American squad is determined and led. Whether those changes can stem the tide of the European juggernaut remains to be decided.

Unlike past Matches — Team Europe will field a mix bag squad. No less than six rookies will play for Europe for the first time. Will nerves undermine their virgin journey? Hard to say with any certainty.

The American squad features a slew of previous players — but it also included a selection process in the last few weeks that had many wonder what Love would do with his four Captain picks. The 7th ranker player in the world — Bubba Watson — failed to make the squad and opted to accept a supporting Vice Captain’s position. No player ranked that high in the world has not been selected in previous Captain picks by either side. Love’s Captain choices of Rickie Fowler, J.B. Holmes, Matt Kuchar and Ryan Moore will need to demonstrate that they truly belong on such a pressure-filled stage.

The volume of analysis has come from all quarters on how the USA Team can win back the Cup but the simple explanation is totally straightforward — the American squad will need to perform when called upon.

Since the Ryder Cup is a match play event where each hole is contested separately — it requires players to be able to summon up execution skills when the situation demands. You don’t have 18-hole to get back into the moment — you need to execute at that point on any given hole. Making putts when needed — either to tie or win a hole — can prove to be a nerve-rattling experience. The Ryder Cup exposes flaws more than any other golf event. Individuals want to demonstrate their prowess on such a stage — but there are more than a few times when individuals have blown critical opportunities when presented.

Ryder Cup pressure is like no other in all of golf. The two squads are fully aware of what is at stake. One team will win – the other will ponder how defeat came their way. The USA squad will have home support but that also existed when the Matches were played at Muirfield Village, Oak Hill, Oakland Hills and Medinah respectively. All resulted in losses.

The first match of the foursome format today pits Patrick Reed and Jordan Spieth against the likes of Justin Rose and Henrik Stenson. Reed and Spieth represent the next generation of top tier American golfers. The wherewithal to beat a superbly talented duo of Rose and Stenson will indicate much on whether the USA squad has shaked off the last numbner of defeats and is able to make a clear statement that yesterday is history and that there is a new future. Reed and Spieth can certainly show that new talent on the USA side is now going to make its mark.

The aura and grandeur of the Ryder Cup is beyond any other golf event. Individuals must mesh as teammates and summon the courage and focus to push beyond the excruciating pressure that is common to this event. Team USA needs a win in the biggest of ways. Will they be able to rise to the occasion? Or will Team Europe once again show that the best collection of golfers resides once again on the other side of the pond?

We will now see in the next few days.