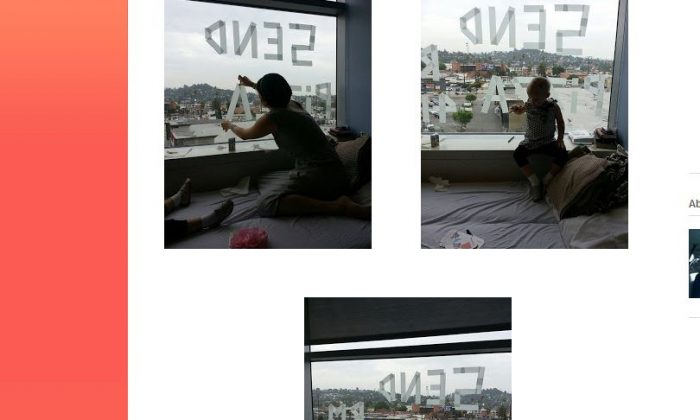 A screenshot of the family's Our Little Hazelnut blog shows the "SEND PIZZZA" signs.
Social Media

Hazel Hammersley’s pizza party was thrown by users of the social media site Reddit after the mother of the 2-year-old child posted a sign to “SEND PIZZA” as a joke.

A photo of the sign made out of medical tape at the hospital room made it onto Reddit, and the request was granted for the girl, according to People magazine.

Pizzas were ordered from across the country for Hammersley, mother Lauren, told the magazine. She had to politely decline some of them, which reached her daughter’s Los Angeles hospital room.

Hazel Hammersley was diagnosed with stage 3 neuroblastoma in April and has to stay at the hospital for 18 months for treatment.

“We began hearing news that several pizzas were being delivered to the hospital. After only a few short hours, we were told that someone had taken a picture on the street of our sign, had posted it to Reddit.com and it had reached #1!!” Lauren wrote on the Our Little Hazelnut blog.

A donation website was also set up for the girl and her family.

“We have been absolutely humbled and surprised by the outpouring of love and support from the online community and can only hope and pray that this brings awareness to Neuroblastoma and the Childhood Cancer Community,” she wrote of the Reddit experience.