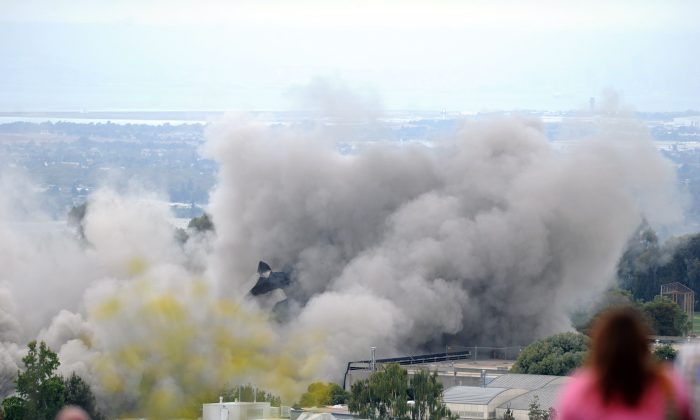 Warren Hall is imploded on the campus of Cal State East Bay in Hayward, Calif., on Saturday, Aug. 17, 2013. The former administration building has been vacant for two years after it was declared seismically unsafe. The U.S. Geological Survey scientists had placed more than 600 seismographs in concentric circles within a mile (1.6 kilometers) of the building to pick up the vibrations. They hope the unique experiment will help map out where the ground might shake the most when the big one hits. (AP Photo/Bay Area News Group, Dan Honda)
US

Hundreds of spectators gathered to see a 13-story building implode in Hayward, located in the East Bay.

NBC Bay Area reported that the old administration building was imploded because it was deemed the most seismically vulnerable structure in the California State University system.

The building was constructed around 2,000 feet from the fault–which is considered one of the more dangerous ones in the United States.

The last major earthquake on the Hayward Fault was in 1868.

U.S. Geological Survey scientists set up more than 600 seismographs in circles around the building.

“We are trying to measure ground motion,” Geophysicist Rufus Catchings told NBC. “When the building comes down there will be a thump that will put seismic energy into the ground.”

“It was so fast it was over before you knew it,” onlooker Sally Lopez, 71, told KTVU.

“Wow, unbelievable,” Eva Heitmann of Vallejo told the San Jose Mercury News. “All I can say is, wow.”

And Hayward local Lachlan Riley-Wilson, who is 7, said that “besides sunsets that was the most amazing thing I’ve seen. My mouth was open.”