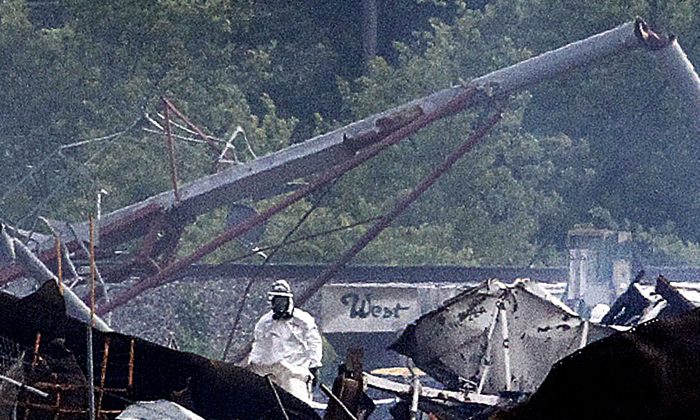 A searcher in a protective suit walks through the blast zone of the fertilizer plant that exploded Wednesday night in West, Texas Thursday April 18, 2013. (AP Photo/The Fort Worth Star-Telegram, Ron Jenkins)
US

WEST, Texas—On the first Sunday after a fertilizer plant explosion leveled part of a tiny Texas town, pastor John Crowder stood atop a long flatbed overlooking a hayfield and spoke to his congregation.

Crowder’s First Baptist Church in West remains blocked off as investigators work on the scene of Wednesday’s blast that killed at least 14 people and injured 200. So about 100 people sat in white folding chairs Sunday morning, while others carried their own.

“We have lost our friends and neighbors,” Crowder told the audience. We have lost the safety and comfort of our homes. But as scary as this is, we don’t have to be afraid.”

Authorities have not yet identified what caused the blast, which was so powerful it registered as a small earthquake. Assistant state fire marshal Kelly Kistner said the blast left “a large crater.”

The explosion destroyed about 50 homes and severely damaged a nursing home and other buildings nearby. Kistner said all fires have been extinguished at the explosion scene and the remaining fertilizer tanks at West Fertilizer Co. are not a danger.

Some of the people who attended Sunday’s outdoor service wore T-shirts calling on others to “pray for West.”

“Every time I close my eyes, all I can think about is the explosion,” said Edi Botello, a senior at West High School. “People running around. People evacuating. There was one point I couldn’t even talk. I just stuttered.”

The destruction was evident in a short visit to the area organized for reporters.

An apartment building just across the railroad tracks from the plant appeared to bear the brunt of the explosion, according to a pool report. The building’s roof was collapsed, its windows were blown out and chunks of concrete from the plant littered the space between the tracks and the apartments.

“Several blocks we had projectiles or shrapnel that has been found of different sizes,” Kistner said. “Smaller pieces have been found blocks away.”

The wave radiating from the blast also hit the nursing home across the street from the apartments. There too, windows were blown out, ceiling tiles were visible throughout the rooms and the red brick exterior was cracked. At West Intermediate School, a northern wall was charred and the southern wall showed structural damage.

Crews from Union Pacific were repairing the railroad tracks, but reporters were kept from climbing the berm to see what was happening at the fertilizer plant. Above the berm, four heavily damaged metal structures were visible at the plant.

More than 60 people are working in the blast zone for the federal Bureau of Alcohol, Tobacco, Firearms and Explosives and the state fire marshal’s office.

Kristner said officials have found the seat, or center, of the explosion, “which is important, because as we conduct our investigation we’ll be working from an outer perimeter inward, from the least damaged to the greatest damage. So knowing the seat of that explosion is important.”

Robert Champion, the special agent in charge for ATF’s Dallas office, said experts plan to get into the crater in the next couple of days and start digging it out “to see what transpired to cause this devastation.”

“It’s a slow process, but we’re getting there,” Champion said.

The town of 2,800 people was previously known in Texas for its deep Czech heritage — from the designs of storefronts in the town center and the names of streets and businesses to the “Czech Stop” bakery selling kolaches and other pastries to drivers exiting Interstate 35.

At the largest Roman Catholic church in town, the Rev. Boniface Onjefu’s congregation on Sunday included firefighters and emergency workers who could be spotted in bright yellow jackets.

The explosion reportedly killed 10 first responders, many of them volunteer firefighters who came after initial reports of a fire at the plant. A memorial service for first responders is scheduled for Thursday on the campus of Baylor University in nearby Waco.

“I stopped at the nursing home,” Onjefu said. “I noticed a lot of people trapped. I assisted. I prayed with some and held the hands of some that needed comfort. I saw him in the eyes of everyone.”

“God heard our prayers and prevented another tank from exploding.”