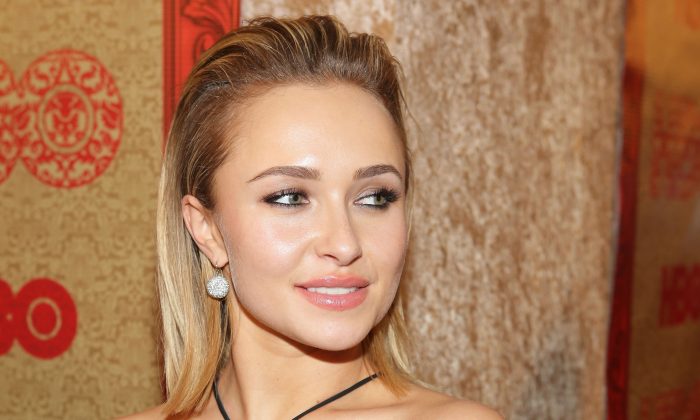 Hayden Panettiere may be the latest victim of a massive hack that has left hundreds of nude photos on the Internet.

Panettiere, best known for her roles in “Heroes” and “Nashville,” is seen in one of the pictures in an unknown setting with most of her body cropped out, but it’s unclear whether she’s wearing any clothes.

A fourth picture shows her in a wetsuit on a boat.

Panettiere was one of the names on the so-called master list of victims that emerged soon after the first pictures came online about two weeks ago, but no pictures of the actress had surfaced before now.

At least two of the pictures–the ones showing her in a bathtub–appear to come from the Fappening Report account, which has also claimed to be behind recent leaked pictures of Aubrey Plaza, Avril Lavigne, and Kaley Cuoco. The celebrities in all the pictures have had clothes on or have been positioned in such a way that their private parts are not exposed.

The account and the recent pictures have sparked debates on Reddit, with most users expressing that they’re not impressed with the pictures.

“That looks more like a picture from a red carpet event or something, not necessarily a leak,” said one user, although another replied: “It’s not from a red carpet event.. the bottom half of the picture that’s cropped out makes this very clear (she is is topless and is covering her bare breasts with her hands).”

Other users were happy with the new pictures, though.

“Thank you for posting good sir!” said one.

“I think they might be real…hopefully we get some more,” said another.

Panettiere, who is currently pregnant, and engaged to boxer Wladimir Klitschko, has not commented on the pictures.