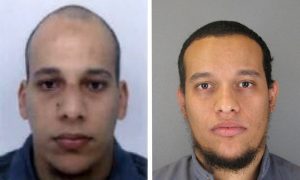 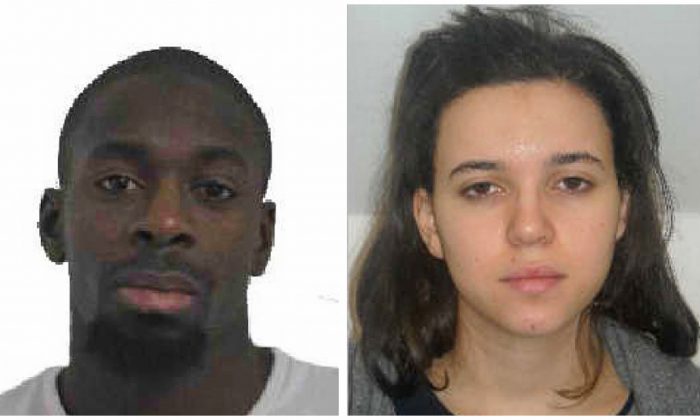 In this combination photo provided by the Paris Police Prefecture, Amedy Coulibaly (L), and Hayet Boumddiene, two suspects named by police as accomplices in a kosher market attack on the eastern edges of Paris on Friday, Jan. 9, 2015. A police official says the man who has taken at least five people hostage in a kosher market on the eastern edges of Paris Friday appears linked to the newsroom massacre earlier this week that left 12 people dead. Paris police released a photo of Amedy Coulibaly as a suspect in the killing Thursday of a policewoman, and the official named him as the man holed up in the market. He said the man is armed with an automatic rifle and some hostages have been gravely wounded. He said a second suspect, a woman named Hayet Boumddiene, is the gunman's accomplice. (AP Photo/Prefecture de Police de Paris)
Europe

Hayat Boumeddiene May Have Escaped Through Turkey Into Syria

ISTANBUL—A Turkish intelligence official says authorities believe the common law wife of one of the gunmen behind the attacks in France came through Turkey days before and may have crossed into Syria.

The official told The Associated Press on Saturday a woman by the same name of the common law wife of Amedy Coulibaly flew to Istanbul on Jan. 2.

The official said the woman resembled a widely distributed photo of the woman, Hayat Boumeddiene. The official said she landed at Sabiha Gokcen, which is Istanbul’s secondary airport, stayed two nights in Istanbul before traveling to Sanliurfa near the border with Syria and “then disappeared.”

He spoke on condition of anonymity because he wasn’t authorized to speak on the record.