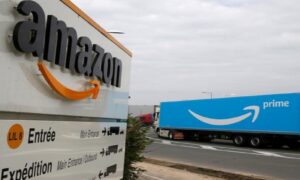 The logo of Amazon is seen at the company logistics centre in Boves, France, on Nov. 5, 2019. (Pascal Rossignol/Reuters)
US News

Sen. Josh Hawley (R-Mo.) is asking the Justice Department to open a criminal antitrust investigation into Amazon.com, citing claims made in a recent news report that the online retail giant has engaged in “predatory and exclusionary data practices to build and maintain a monopoly.”

The Wall Street Journal reported on April 23 that Amazon was using data from third-party sellers to develop competing products, contrary to the company’s own policies. The newspaper cited 20 former employees of Amazon’s private-label business and documents it reviewed that allegedly revealed such practices.

“These practices are alarming for America’s small businesses even under ordinary circumstances,” Hawley wrote in a letter to Attorney General William Barr on April 28 (pdf).

The type of data Amazon is able to access poses a great threat to competition compared to data accessed by traditional retail stores, Hawley said. While ordinary brick-and-mortar stores have access to data such as products that are purchased or when they are purchased, online retailers such as Amazon can collect much more data, he said.

He said online retailers can, for example, track how long a person’s attention stays on a product page, which features attract a person, and images a person views.

“Amazon’s capacity for data collection is like a brick-and-mortar retailer attaching a camera to every customer’s forehead,” he said.

He said that the type of practices alleged in the Wall Street Journal article would amount to a violation under federal antitrust law.

“Thousands of small businesses have been forced to suspend in-store retail and instead rely on Amazon because of shutdowns related to the coronavirus pandemic. Amazon’s reported data practices are an existential threat that may prevent these businesses from ever recovering,” he added.

Hawley pointed out in his letter that the use of aggregate-level data can be detrimental to competition, saying that “aggregate data can still enable Amazon to create or solidify monopoly power.”

“Using aggregate data just means that, when Amazon uses data to create copycat products, it harms multiple small businesses instead of just one,” the senator wrote.

An Amazon spokesperson told The Epoch Times in an emailed statement that it strictly prohibits “employees from using non-public, seller-specific data to determine which private label products to launch.

“While we don’t believe these claims made by the Wall Street Journal are accurate, we take these allegations very seriously and have launched an internal investigation,” the spokesperson said.

“If true, this report raises deep concerns about Amazon’s apparent lack of candor before the Committee regarding an issue that is central to our investigation,” Nadler said in the statement.

“At best, Amazon’s witness appears to have misrepresented key aspects of Amazon’s business practices while omitting important details in response to pointed questioning. At worst, the witness Amazon sent to speak on its behalf may have lied to Congress,” Cicilline said.

A Justice Department spokesperson told The Epoch Times the department has received the letter and is reviewing it.